Stories behind the hymns – why they matter

Who were the people who wrote so many of hymns that have stood the test of time? Why did they write? How do they help us to ‘sing the faith’ still?  Mark Woods goes in search of the stories behind the names.

I've sung hymns as long as I can remember. I'm a cradle Christian, and the old songs of the Church burned themselves into my brain long before I was able to understand them. I loved the precision of the rhymes, the regular beat of the words and the oddities of expression.

I was fascinated, too, by the names and dates at the bottom of each song. Who were these people? Some of the names were familiar from books of poetry and odd references in sermons, but I knew nothing about them. So over the years I found out what I could, and discovered that knowing something about the writers enriched the writing.

And there are so many stories. Take Martin Rinkart for instance, the author of Now thank we all our God (StF 81). He ministered in the shadow of Germany's ruinous Thirty Years War, during which 30 per cent of the population died; in some areas it was as high as 75 per cent. Towards the end of the war his town was flooded with refugees, and famine and plague carried off thousands. Rinkart found himself conducting 50 funerals a day.

The besieging Swedish army demanded a huge ransom to leave the city alone; Rinkart went out to plead with them for mercy and, impressed by his courage, they withdrew. The hymn – after all that blood and horror – was a thanksgiving for deliverance. Singing it in that light lifts it far above the routine. 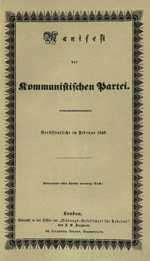 The Communist manifesto - inspiration for revolution and strife

Or there's that lovely carol, It came upon the midnight clear (StF 205). It was written by Edmund Hamilton Sears. An American, he was an oddity in being a Unitarian minister who believed in the divinity of Christ, but it's the date of the hymn that strikes us. It was written in 1849, the year after the Communist Manifesto was published and revolutions swept the old order from power in many European countries. America had just fought a war with Mexico that Sears believed was unjust, and he foresaw with dread the Civil War that lay just ahead. So he writes of the 'two thousand years of wrong' and the 'men of strife' with his eyes open and his heart sore, but he still believes.

Then there's the lovely Just as I am, without one plea (StF 556), a great evangelistic hymn that's probably accompanied more souls to salvation than any other because of its use in Billy Graham campaigns. It was written by Charlotte Elliott in 1834 or ‘35. She was an invalid who struggled with depression and became a Christian through a conversation with a minister named Cesar Malan. He asked her at dinner if she were a Christian and she brushed him off irritably, but later said, "I want to come to Jesus but I don't know how." "Why not come just as you are?" he said. Later her brother, a minister, was organising a bazaar and she was frustrated at not being able to help. But Malan's words came back to her and she wrote ‘Just as I am’ – "poor, wretched, blind", "tossed about with many a conflict" – and the hypnotic, repeated last line: "O Lamb of God, I come!" The repeated last line is hypnotic.

The stories are wonderful, but they have survived because of the quality of the work, and because these hymns have fed us for decades and even centuries. They were written by people like us, but facing different issues in different worlds. The fact that they still speak is testimony to their own skill, but also to the power of God’s Spirit and the communion of saints across the ages.

Mark Woods is a Baptist minister and journalist.  His book Salvation Songs: 70 great hymns and their stories is published by Verité at £9.99.