A race against time: Communities unite to raise money for famine appeal 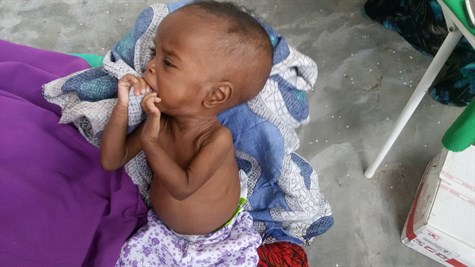 On 22 February 2017, All We Can and the World Church Relationships Team of the Methodist Church in Britain, launched an urgent appeal to respond to this catastrophic situation. Since then, the true extent of the need has been highlighted by the United Nations. Stephen O'Brien, UN Humanitarian Coordinator, defined the current situation as a "critical point in history". 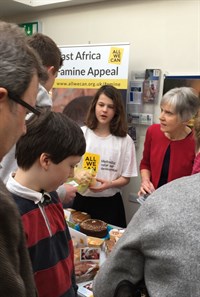 The collective action of individuals and churches has already been inspiring, with more than £100,000 given in response to the East Africa Famine Appeal. With millions facing starvation across East Africa and the wider region, the task might seem overwhelming - but communities have risen to the challenge.

For many, the response to this appeal has been deeply heartfelt. Sister Eluned Williams MBE explained, "I cannot imagine what it is like not to know where tomorrow's food is coming from. It is just so horrendous and the very dignity of people is stripped away. What I can give might only be a little, but if many give a little then I hope lots of people who are in great need will be helped."The Revd Gail Hunt of Gracious Street Methodist Church in Yorkshire said, "We may be here in Knaresborough, but we are one human family. We wanted to respond because we have all been aware of what has happened in the past, we have all seen those horrific images on our television screens."

Reaching the most vulnerable

The funds already raised for the appeal will be used across a number of countries including Yemen, Somalia and South Sudan. In Yemen, life-saving food will be distributed by All We Can's local partner to some of the most vulnerable families. In South Sudan and Somalia, All We Can's partner has already begun providing nutritional support for the most malnourished victims of the food crisis. In South Sudan, All We Can are responding in one of the regions flagged by the United Nations as most severely affected by the famine. In Somalia, money already raised will be supporting 16,000 people to access nutritional supplements.

In 2011, Somalia saw more than 260,000 of its people die as a result of a devastating famine. Approximately half of those who lost their lives were children under the age of five. Children are often the most vulnerable to acute malnutrition, and support is vital for the under-fives. A simple, nutritious, high-energy peanut paste can save lives - providing children with the nourishment they need to gain weight and to fight diseases that might otherwise defeat their weakened immune systems.

The need is vast - and the Methodist Church in Britain continue to urge people to respond quickly, generously, and collectively to this catastrophic situation by supporting the appeal being managed by All We Can.

£15 could provide a vulnerable individual with food aid in Yemen for a month. £45 could provide life-saving nutrition for an acutely malnourished child in South Sudan for five weeks.

[Image 1] Baby Asha was severely malnourished and crying when she was first brought in to the health facility run by All We Can's partner in Somalia. ©Medair