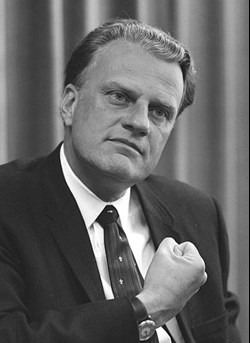 The President and Vice-President of the Methodist Conference, the Revd Loraine N Mellor and Jill Baker, have offered their condolences to the family of US evangelist the Revd Billy Graham, who has died aged 99.

Graham, best known for preaching to audiences in large arenas, died at his home in North Carolina on February 21. He became a Christian aged 16 after listening to an itinerant evangelist and was ordained as a minister four years later.

The President said: “We send our thoughts and prayers to the family and friends of Billy Graham, without doubt one of the greatest evangelists of the last century. He shared the love of Jesus Christ to millions around the world.”