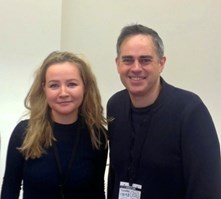 Faith in Politics, an exciting new podcast series that features guests discussing topics from current affairs that link in with faith, has been launched by the Joint Public Issues Team (JPIT).

JPIT is a joint venture of the Baptist Union of Great Britain, the Methodist Church, the United Reformed Church and the Church of Scotland. The team works on issues of justice and inequality by influencing those in power and energising local congregation.

The podcast was created by Helen Byrne and Rachel Allison who are working for the church as Parliamentary interns.

Each monthly episode will be presented by Helen and Rachel - both avid podcast listeners - and will feature lively discussions from the world of politics from a faith viewpoint, interviews and a ‘musing slot’, inspired by Thought for the Day.

Topics such as poverty, inequality, peace-making and the environment plan to be covered.

Those taking part are people who are living out a faith of some kind in public and political life. Some of the guests who will feature include the Co-Leader of the Green Party, Jonathan Bartley, Labour politicians, the Rt Hon Stephen Timms and Alan Milburn, and the Conservative politician and member of the House of Lords Baroness Sayeeda Warsi.

Each 30-minute podcast will be released on the last Thursday of every month and can be downloaded from http://www.jointpublicissues.org.uk/podcast. You can also subscribe to it from Google Play for Android devices and iTunes or Podcast for Apple devices.

Faith in Politics is aimed at JPIT's existing supporters and activists but will also appeal to a younger audience thanks to increased engagement with current affairs and politics, and the accessibility of social media and podcasts.

Helen Bryne explains: “Christians have a civic duty to engage with the world around them, because our Lord is a God of justice and whether we like it or not, faith in its many manifestations shape our political landscape.”