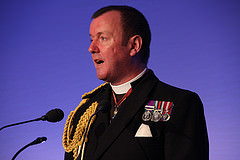 The centenary of the outbreak of World War 1 is a reminder to the Methodist Forces Board of the moment when its predecessor, the Wesleyan Royal Navy and Army Board, regularised the Church's relations with the Armed Services. Today the Revd Scott J Brown CBE QHC, the Chaplain of the Fleet (Royal Navy); the Revd Jonathan Woodhouse CB QHC, the Chaplain General (Army); and the Revd Nick Barry, Deputy Chaplain-in-Chief in the Royal Air Force, commemorated the service of contemporary men and women in Her Majesty's Forces at the Methodist Conference in Birmingham.

Addressing the Conference, the Revd Scott J Brown CBE QHC, said: "We are delighted to be addressing the Methodist Conference today, giving the wider Church an insight into our work and ministry among the men and women of the Armed Forces, and their families. All three Services are very grateful to the Methodist Church for your prayerful support and for the faithful service of your ministers who are serving as chaplains today."

As part of the centenary commemorative celebrations, the Methodist Church has published a series of six essays entitled Sacred Presence and Ethical Challenge, which reflect on the Church's chaplaincy response to World War 1. The essays can be downloaded here.

The Revd Robert Jones, Secretary to Forces Board and editor of the essay series, said: "So much changed with the coming of World War 1; not only in British society, but in the Church as well. Faced with the hugely expanding Army, the three Methodist Churches decided that they needed to engage with the Forces by appointing chaplains to serve in the military. Their task was not just to offer the critical pastoral care that is fundamental to all chaplaincy, but also to be a sign of sacred presence amidst the awful suffering that war brings, and to be a voice, or a prophetic ethical challenge, when the decisions of battle were made. Now, a hundred years on, these same responsibilities lie with chaplains who speak with gospel insight in places and situations that most of us could never get to."

There are 29 Methodist chaplains serving in the Forces; 7 in the Royal Navy, 12 in the Army and 10 in the Royal Air Force. This year the past President of Conference, the Revd Ruth Gee, visited RAF Brize Norton and the Headquarters Air Command RAF High Wycombe, where the Chaplain in Chief, the Venerable Ray Pentland CB QHC, held a dinner in her honour. Ruth was also welcomed to the Methodist Tri-service Forces Chaplains Conference, which explored the role of military chaplaincy in the context of modern culture and modern Church at Amport House in February.

This year the Methodist Forces Board has been able to support a number of small grants to chaplains for activities within the Forces' communities. One such grant was used to purchase copies of Singing the Faith for use in Camp Bastion. The Forces Board extended its thanks to the Conference for the prayerful support given to all its chaplains and encouraged anyone who would like to know more about Forces Chaplaincy to speak to members of the Board.