An update from the Methodist Ministers' Housing Society 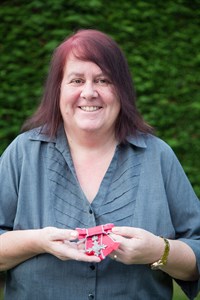 It is with deep sadness that the Methodist Ministers' Housing Society announces the sudden death on 29th September 2017 of the Chair of its board, Debbie Faulkner MBE, at age 55.

Debbie joined the board in 2009, eventually assuming the role of Chair. Over the years, she served the Society conscientiously, and willingly shared her professional expertise as a human resources professional.

The Society - which meets the housing needs of retired Methodist presbyters and deacons of limited means - had helped Debbie's parents find a home for their retirement. Her late father Rev Tony Bullock had served Methodist churches across southern England. It was that family background of conscience and compassion that compelled Debbie towards a life of service.

Debbie met her husband-to-be Cliff at the Methodist Association of Youth Clubs. The couple married at Sandhurst in 1981. They had a daughter, Lizzy, who herself had a daughter, Ruby, earlier this year. Ruby was a source of delight to Debbie.

It was when Debbie was working at the Fire Service College - from 1988 to 2012 - that others noticed her caring attitude. Her boss put her name forward for an MBE for her work with the fire service, the community and charity. The Prince of Wales presented her with the honour at Buckingham Palace.

Debbie was a school governor for more than ten years. She raised funds for several other charities such as World Vision, Samaritan's Purse and Action for Children. An active member of Shipston-on-Stour Methodist Church, Debbie took on the role of church council secretary, preparing and delivering acts of worship and helping lead a monthly café church service.

The thoughts and prayers of all the board members and staff of the Society are extended to Debbie's family and friends. She will be greatly missed.

The Revd Gareth J Powell, Secretary of the Methodist Conference added: "A great many individuals across the wider Connexion have cause to be grateful for the care and insight with which Debbie served as a Board member for many years - and latterly as Chair - for the Methodist Ministers' Housing Society. We give thanks to God for Debbie, for her life and ministry, and we hold Debbie's family and friends in prayer."

Pictured is Debbie Faulkner with her MBE (Photo: www.jefflandphotography.co.uk )