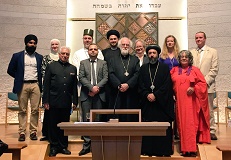 To read about the sponsorship of refugees in Birmingham please click here.

The Vice President of the Methodist Church, Rachel Lampard, has chaired the launch of a letter from over 200 faith leaders to the Prime Minister calling for more help to be given to refugees fleeing Syria, Iraq and other areas of conflict. The launch took place at the Liberal Jewish Synagogue in London on the 12 September 2016.
Religious leaders, including Methodist President the Revd Dr Roger Walton, and 17 Methodist District Chairs have added their names to a growing roll-call of prominent voices criticising the Government's response to the refugee crisis as too slow and too narrow, including former judges, eminent lawyers and senior economists.
In an unprecedented joint initiative, senior faith leaders have asked Theresa May to unblock rules currently preventing families from being reunited.
In her speech as chair of the launch, Rachel Lampard said: "At the centre of our call today is support for families. Whatever shape they are, families are a necessary part what it is to be human. As faith leaders, we are deeply concerned that current Government policy undermines the chance that many refugees have to a family life.
"Under current British immigration rules, it is almost impossible for a British citizen to bring to this country some categories of their family, even if the family members are living in refugee camps."
Also present was the former Archbishop of Canterbury, Lord Dr Rowan Williams, who commented: "We make (the proposal) because the pace seems very slow at the moment in responding to this crisis. We have had several months of discussion about the reuniting of children with parents. We have, as yet, very little to show for it."
Referring to society's response to the crisis, he added: "The refugee issue is not going to go away, however much we put our fingers in our ears and screw our eyes tight shut - that is not going to change. Turning people away does not solve the problem, it shifts the burden very often in the world we currently live in on to those less able to bear it than we are.
"The issue is not going to disappear, and so it's futile and foolish to pretend that it will if we ignore it for long enough."
In their open letter, senior Christian, Muslim and Jewish clerics and leading representatives of other faiths have pointed to serious defects in family reunion policy for refugees, leading to 'avoidable tragedies'.
The letter says:
"Under the present immigration rules, a British doctor of Syrian origin could not bring her parents from a refugee camp in Lebanon - even though they were refugees and she could support and house them.
"A Syrian child who arrived alone in the UK could not bring his parents from a refugee camp in Jordan - even if the child were recognised a refugee and even though his parents were themselves refugees.
"Families in these situations can currently be reunited only by resorting to desperately unsafe irregular journeys, sometimes ending in avoidable tragedies."
One of the signatories of the letter, Rabbi Herschel Gluck OBE said: "Being the son of refugees from Hitler, who lost over 100 of their close family members because of the lack of compassion and vision with regard to family reunification by the authorities at that time, I feel especially obliged to help ensure that we don't repeat those mistakes."
Qari Muhammad Asim MBE, Chief Imam, Makkah Masjid said: "Many refugees with close family members in the UK are risking their lives trying to escape deplorable conditions in camps and reunite with their families. Many lives could be saved if safe legal routes were secured by the Government."
The Rt Revd Peter Hill, Bishop of Barking pointed to the failures in family reunion policy affecting unaccompanied refugee children: "The system is broken and The Home Office must establish a functional system which delivers now, without bureaucratic delays. At the current rate of reunification it will take a year before all the children in Calais are reunited with their families. This is forcing children to take matters into their own hands on rail tracks, stowing away in lorries and putting themselves into the hands of unscrupulous people traffickers. How can a civilised country allow this to continue?"
Lord Singh of Wimbledon CBE, DL, Director Network of Sikh Organisations UK said: "We all have a responsibility to help those forced to make perilous journeys fleeing horrendous conflict, and reunite families tragically torn apart."
The faith leaders join over 350 judges and lawyers who published an open letter to the Prime Minister on 12 October 2015, signed, among others, by the former President of the UK Supreme Court and other former law lords.
They also join over 120 senior economists who wrote a scathing open letter to the Prime Minister in February 2016, including the former Deputy General Secretary of the United Nations, the former Director General of the World Trade Organization's General Agreement on Trade and Tariffs and the former Vice President of the World Bank.
27 major humanitarian and refugee NGOs also published their own letter on 4 January 2016, including Oxfam, Amnesty International, the Refugee Council and Christian Aid.
The series of letters to the Prime Minister from senior leaders of these sectors of civic society urge the Government to adhere to 'four refugee principles', setting out minimum standards for a fair and humane refugee policy.
Notes to Editors
The current immigration rules render it almost impossible for many British citizens and permanent residents and for recognised refugees already living in the UK to bring certain categories of close family members to join them. Those stringent rules are currently not relaxed even if the overseas family members overseas are refugees living in desperate conditions. In addition, although many unaccompanied minors in Calais, Dunkirk and on the streets of Greece have family members in the UK and a right under European law to come to the UK to be reunited with them, the children are unable to enter the UK due to bureaucratic obstacles and Home Office inertia. Faith leaders say this must change.