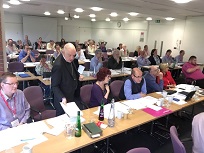 Impact of 'Mapping Way Forward: Regrouping for Mission'
The 2015 Conference, by way of Notice of Motion 2015/204 had requested research into the impact of the Mapping a Way Forward: Regrouping for Mission initiative.  The initiative, which has been underway for almost a decade, has seen a move towards larger circuits. The majority of the 570 circuits that existed in 2007 have been affected, with over half being merged into 374 circuits by 2014.

The research report indicated that the process had been generally positive.  However, as the level of responsibility has increased some circuits now need paid staff to undertake duties previously done by volunteers. Superintendents can be reluctant to offer for very large circuits.  There is also the need to undertake research into any reduction in diversity as a result of the regrouping.

Connexional Central Services Budget
Debate was held around the need to give the Conference options for calculating the Methodist Church Fund (MCF) assessment.  Three options will be put to the Conference: to increase MCF by 1%, to decrease MCF by 1% or to freeze at the current level. The assessment, to be implemented from September 2016, would be in place for three years.

Code of Conduct for Ministers
A paper was presented in response to one of the recommendations of the Past Cases Review, proposing a code of conduct for ministers. The working party will bring a draft code to the Methodist Council in January 2017, in order that it might be presented to the 2017 Conference.

Ministries Committee Report
The Committee proposed revisions to the selection criteria for ordained ministry that will be put before the Conference.

Mission Alongside the Poor Programme
The review of the Mission Alongside the Poor Programme was presented to the Council. The review examines the issues facing today's poor and the churches that support them.  Discussion was had regarding a revised name that maintains the definition of the programme's objectives but reflects the changing priorities and language of poverty. The committee recommended the title "Methodist Action on Poverty and Justice".   The report will be placed before the Conference for consideration.

Consultation paper: Methodist Ministers Pension Scheme
It was put to the Council that future increases in pensions be linked to the Consumer Price Index (CPI) rather than Retail Price Index (RPI).  A consultation with members showed the majority were in favour of the change and the resolution was passed by the Council.

Safeguarding Report
A report on safeguarding within the Church was presented. An increase of staff within the connexion Safeguarding team was noted as a response to the workload from the Past Case Review.  It was also reported that legislation has increased the scope of safeguarding in relation to the protection of vulnerable adults.

The Council agreed the principle that Districts should have adequate and appropriate levels of safeguarding advice and support.  In agreeing this principle, the Council agreed to direct the Team, in consultation with District Chairs and District Safeguarding Officers, to undertake work on the practical and financial implications.  It was commended to the Conference that fully costed proposals for achieving professional supervision for District Safeguarding Officers, including the use of suitable volunteers, be presented as part of the 2017/18 budget.

Resourcing Leadership
The report from the Resourcing Leadership Working Party recommended the establishment of a Connexional Vocations Officer to ensure appropriate support and highlighted the need to research barriers to participation and how they can be overcome. The Connexional Secretary will now take steps to implement the recommendations within existing budgets and headcount.

Marriage and Relationship Task Group
The Marriage and Relationship Task Group are due to report to Conference in 2016. While the group has not yet indicated any intended resolutions, a small scrutiny group consisting of the Revd Eleanor Jackson, Revd Peter Sheasby and Ms Gill Dascombe were appointed to advise on the appointment of any further working parties or task groups.

Report from Strategy and Resources Committee (SRC)
The report noted the Chair of the SRC and the Secretary of the Conference were satisfied that the Methodist Academies and Schools Trust (MAST) are seeking to support state funded Methodist schools and explore ways forward in the light of recent announcements regarding schools becoming academies.