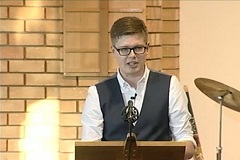 This important role in the life of the Church will see Tim represent thousands of young people across the UK, both at home and abroad.

The service, presided over by the Revd Dr Roger Walton, President of the Methodist Conference, and the Revd Helen Cameron, Assistant Secretary of the Conference, was streamed live over the internet, broadcast in churches and to youth groups across the country.

Tim takes up his new role following an election that took place at last year's 3Generate, the Methodist Children and Youth Assembly; taking over from the previous Youth President, Craig Gaffney.

As well as hymns, prayers and Bible readings, part of the induction ceremony saw the President of the Conference anoint Tim with oil, a practice that has "a long tradition in the scriptures of anointing people for special service in God's world."

Speaking at the service, former Youth President Craig Gaffney said to Tim: "You are coming into a role that is hugely exciting and hugely daunting at the same time … this will be an amazing year. God has put you in this place to be a voice for the young people of the Methodist Church, but you can't do that on your own. You need to rely on God and His strength in that journey."

In his inaugural address, Tim began by thanking Craig for his inspiration to the Church over the past year before moving on to his own priorities for the year ahead.

"I quickly learned that if you want to effect change, you need to be part of the conversation about change in the first place," Tim said, going on to emphasise that this can only be done through "encouraging debate, but making it balanced."

Tim Annan is a youth worker from Grantham and has spent four years completing a Youth Studies degree.

The Lincolnshire-raised Methodist is excited by "the difference young people make for our churches and our communities."

Tim is keen on popular culture and how the Church reconciles Christian values with local communities; by engaging in political action, dialogue, art, music.

Tim added: "I will put forward the ideas of the young people of the Methodist Church to challenge and change Church. Together we can make an impact not only on our Church, but on our society as well."