"The [new] room was full as it could contain. We rejoiced from four to six, that to us a Son is born, to us a Child is given" 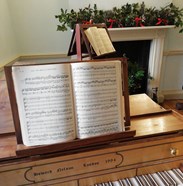 To mark St Nicholas' Day, why not take a virtual journey to Charles Wesley's house in Bristol?

The Georgian Christmas season stretched from December 6th (St. Nicholas' Day) to January 6th (Twelfth Night, Epiphany). So, pull up a chair, grab yourself a mince pie and discover how 18th century history can inspire and encourage you this Christmas.

In 1739 John Wesley was asked by the members of two religious societies in Bristol to create ‘a new room’ where they could meet.  The resulting building served many purposes because John encouraged the religious society members to offer food and clothing to the poor, run a school for children, arrange visits to the nearby prison, and help the sick by running a free medical dispensary. The current New Room is double the size of the original, having been rebuilt in 1748.

Charles and Sally Wesley in Bristol

Charles Wesley, widely regarded as one of the world’s greatest hymn writers, worked in Bristol from 1739 to 1787 and had his family home in Charles Street. At first he lived at No 19 (a house that no longer exists) but then, in 1766, he moved to No 4 and, even after he had to move his family to London, he used this house on his visits to Bristol.

Built in 1742, No 4 was possibly built by George Tully, the man responsible for rebuilding the New Room.  Six rooms have been beautifully restored to how they might have been in Charles’ time: the parlour, the music room, the study, the kitchen, and two bedrooms. Within these rooms is told the story of Charles, his wife Sally and their musically gifted children.

The New Room would by now normally be taking visitors on festive tours around Charles Wesley’s House. Collections Manager Kate Rogers, says "The house would be fully decked out with traditional, seasonal decorations and many groups would enjoy sharing mince pies and singing carols at the end of each tour."

Alas, this year will be very different, as the New Room are unable to run the tours, but that does not stop us from engaging with the history of the house from our own homes.

Kate Rogers has put together a themed journey of Charles and Sally Wesley’s Bristol home which she hopes "will encourage you to rejoice this Christmas".

Speaking about the tour Kate says:  "The content addresses a different theme for each room of the house and audio clips highlight objects, stories and offer points for reflection."

From the importance of music to our well being, the central role of hospitality and friendship in our relationships to history-inspired food recipes, enjoy a taste of life in Georgian Bristol this Christmas. 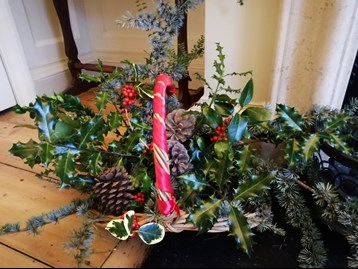