Originally two churches half a mile apart came together, namely North Street and Bradfield Road, on the Bradfield Road site. The decision was taken to fully refurbish the buildings with a car park on the soft ground at the rear and put in place as many modern ideas as feasible. It was also to be multi -purpose use for the community.

I was at the time employed at a local school which had had a new wing built that was equipped with modern technology. A part of this was underfloor heating, rainwater collection for toilets and a roof-mounted wind turbine.

For Coppenhall the suggestion was made about the first two items with the possibility of solar panels on the proposed south facing extended flat roof. The Church was advised that it would be cheaper to be installed during refurbishment than additionally fitted later and there would be some “payback” on these.

The Church’s wooden floor had collapsed a couple of years earlier, so underfloor heating was fitted in the concrete replacement which also took in the kitchen, toilets and new through-concourse. Child-safe central heating radiators were used in the other two rooms.

Three solar panels were fitted to the kitchen/toilets’ roof, whilst a large deep hole was dug in the rear grassland where the new rain water tank would be situated. Once the tank had been piped and covered over, all of the grassland was replaced to make a small hard standing car park. There is just an access manhole to the tank visible. Rain water is directed off two roof sections down to the tank from which a pump supplies water to the four toilet cisterns as required. When the underground tank empties, as in a dry period, the mains water automatically kicks in, but this feeds directly to the W.C. cisterns not to the outside tank. 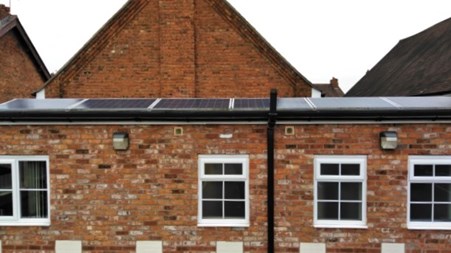 This of course can help to save money on water bills.

The underfloor heating works well and appears to be efficient, this was installed alongside the necessary modern wall and roof insulation without which it would be pointless, (the building had none prior to refurbishment) as well as modern double glazing all round.

One point to emphasise is that where there is underfloor heating nothing should be attached to the floor under any circumstances. All equipment should either be free standing, movable or attached to the wall.

As for the Solar panels they do exactly what they are supposed to and once installed, payment regularly arrives for the electricity that has been supplied to the chosen electricity supplier.

Solar panels are very good but do need an internal space for the electronics feed-in equipment, though are worth investigating if you have a suitable roof area.

Both of the first two items  are preferably carried out with some other major works that might be needed to a building.

All the above are long-term investments in the buildings with a view to their efficient operation.

As for the wind turbine, the one at the school crashed down off the roof during a severe storm and was not replaced. Hence the decision to go for solar panels at the Church.

More information about Coppenhall Methodist Church in Crewe can be found here.