First Methodist Church in England to Host a Village Shop

A friendly store with over 1000 products on sale, the Buckland Brewer community shop operates from the vestry of the Methodist church - and has done since 10th December 2012. The shop premise is leased from the Methodist church at a market rent. Primarily staffed by volunteers it offers a range of goods including a wide variety of local produce, and services for parts of six days a week and prepaid for newspapers can be picked up on Sunday mornings. 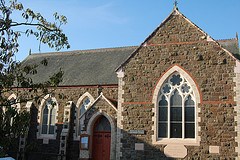 It is the first Methodist church in England to host a village shop. The idea came about when the previous village shop closed in 2009. A village committee identified the church, in the centre of the village, as a potential site and chapel members were keen. After some discussion in the church, a 10-year lease was drawn up. This meant the shop was independent of the church within agreed parameters. It was ratified at local, district and Connexional level in the Methodist church.

The Church funded the building work while the Shop Committee raised funds to open, equip and operate the shop and provide new disabled access and a decking area. The Plunkett Foundation, Village SOS, Community Council Devon, Torridge District Council and the Arthur Rank Centre were all involved. The Church raised the necessary £25,000 needed through grants and the shop committee raised a similar amount through grants and a local share issue. 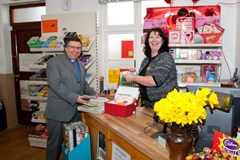 Buckland Brewer community Shop Limited was set up as an Industrial and Provident Society to provide the legal entity to manage the shop using a community co-operative model. They raised some of the funds from a community Shares Scheme.

The committee see the main benefits as being firstly that a beautiful historic building, which was underutilised, is used daily during the week and secondly that the shop serves as a hub for the whole village. It is seen as providing a vital service and a social meeting place but Treasurer Gill Willett admitted the shop underwent some ’wobbles’ in 2016. “We found we couldn’t pay a manager and keep our stock levels up so now it is all on a voluntary basis. Because of that we dropped our opening hours to 9am to 1pm and then from 3 to 5pm in the afternoons. Although our customers do seem to have adapted and I don’t think business has dropped.”

The village is five miles from the nearest town and the shop’s biggest seller by far is milk, followed by bananas… “We now have about a dozen volunteers and try to ensure nobody does more than about two hours a week,” she said. The Chapel too plays host to various social events in the village with a Youth Drop In on In on Thursday; Snooker Club on a Wednesday & a Parent & Toddler Group (part of the Village Under 5 Group) on Fridays.

You can read more about the project, including their tips for success and business plan.  As well, you can get in touch with the church on Buckland Brewer Methodist Church Facebook page.