The thinking behind Project 200
Many years ago St Ives in East Anglia started to set aside money to replace the ageing heating system. By 2014 the sum of £9,000 was in the ‘boiler fund’ when we came to the point of needing to take action. There were signs of damp in many areas of the building and evidence that drains were failing. In short, the building was looking ‘tired’.

At the same time, we were aware that we needed to update our facilities to meet the needs of today’s expectations and create a more comfortable and practical base for our mission. We wanted to expand our Wi-Fi and AV provision, with permanent loop availability in each room; make it easier to provide refreshments in key areas; open up the front aspect to let in more light, but also to make it possible to see into the church from outside; and create step-free access at the main entrances.

Some work had been done in 2008 on re-designing the front entrance to the church, but that had not been taken forward. In 2014 a group was brought together to review that scheme and consider how best to proceed. A proposal was taken to the church council in June 2014 that we appoint an architect and set up a Project Group to take the work forward. Once that group met, it was accepted that all areas of work outlined above needed to be tackled. There was concern at the size of the project as it was developing, but we were encouraged by the District Evangelism Enabler to go ahead. Bearing in mind the scope of the work and the funds required, it was decided to tackle the work in three phases: Damp-busting, new heating system and then the redecoration and refurbishment.  Planning for all three phases needed to be done concurrently.

The Process
A small Project Team was set up and appointed by Church Council. We appointed an architect who has considerable experience of working within the Methodist Church to provide drawings for the layout of the front of the building. The following year we celebrated 200 years since the first Methodist chapel was built on the current site and ‘Project 200' was formally launched.

By 2016 we were ready with an outline scope of works for all the work. We carried out the first open consultation with church members and friends and user groups looking at the proposals. That summer, fundraising began with 5% of all proceeds being given to a charity, and a monthly prayer meeting was held to pray for the Project.

Visits were arranged to look at refurbishment schemes in other chapels in our District. Through one of those visits we were put in touch with a professional fundraiser. Recognising that the whole project was going to cost far more than we could manage to raise ourselves, we appointed her to work with us. We brought forward our quinquennial inspection so that any work identified could be included in the Project.

Damp-busting work [Phase One] got underway in 2017. Gutters and downspouts were cleared, rubble and debris moved from base of the outer walls and several areas of repointing and replastering tackled. One of the team members supervised this work.

We appointed a firm to design the new heating system and later engineers to install it [Phase Two]. The cost would be much higher than anticipated so, to the Team’s huge disappointment, the work was delayed until enough funding was in place. That finally happened in the spring of 2018. The out-dated hot air system in the church and noisy, inefficient gas fired individual radiators in the ancillary rooms were all replaced with an efficient new boiler. Church members agreed to supervise this work, but this was found to be difficult and onerous.

We were delighted that the Local Authority and Connexional Conservation Officer approved our plans to re-shape the front entrance to the church. In the autumn a series of three ‘Imagine Workshops’ were held with members, friends and user groups invited to make their comments on that and: AV, the worship area, storage, welcome, heritage, colour schemes and furnishings, display and noticeboards, and at this stage we recognised that we wanted to include some original creative artwork where we could. A report on the workshops was produced and small groups set about developing the ideas raised. We held regular ‘eco’ reviews looking at issues such as insulation, lighting and ‘greening’ the exterior of our premises. We were delighted to have the help of St Ives in Bloom to provide and plant up a raised bed in our car park.

With our eco-review, a full disability audit and the report of the Imagine Groups ready in early 2019, the tenders for the refurbishment phase [Phase Three] were prepared and the main contractor appointed with an expectation that work would begin as soon as funds were in place. Schedules were drawn up of work to be done by the Project Team in parallel on clearing, ordering new furnishings and fittings, enhancing the AV system throughout the premises. Our fundraiser was ready with the funding package in early 2020 and, after a short delay due to Covid, work on Phase Three began in June. After our experience with the first two phases, our architect agreed to monitor progress alongside members of the Team. This was a great help.

Work on that final phase took just over a year. With that on-going the Project Team worked on colours schemes for paintwork, upholstery fabrics and colours, blinds and eventually ordered chairs for the worship area and later for the hall. The sanctuary furniture was designed and ordered along with two screens and a matching oak front for our new servery in the worship area. The opportunity was taken to create significant additional storage for the wide range of Church and community activities hosted in the building. Wishing to strengthen links with the wider St Ives community, we decided to include a temporary photographic display to decorate the community entrance. We approached our neighbours on the nature reserve opposite the church to submit photos which we had made into photo boards. This display will be changed each year, with a different aspect of community life reflected. We worked on a design for a banner with a textile artist. The banner would show our history, our mission within our local community and our foundations in the sacraments. 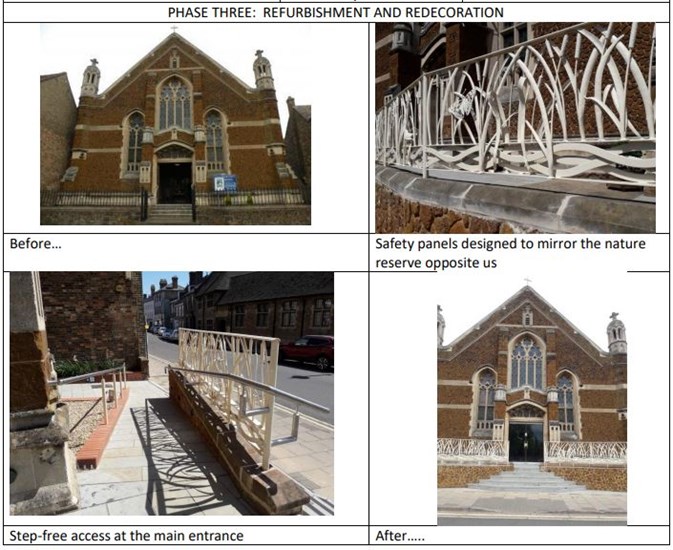 Funding
Alongside the invaluable work of our professional fundraiser, we tried to arrange monthly fundraising events. These ranged from concerts from visiting choirs, to talks, to social events of all kinds and were aimed not just at church members and friends but advertised in the town as well. These brought us a steady, but small income of which 5% was being given away to other charities. We held gift days which brought in some larger sums. We appealed for people to give monthly or make a one-off donation and that had some success. All this work we knew was vital to show potential funders that we were prepared to work ourselves.

We were set back on several occasions by quotes being far higher than earlier estimates. This was partly due to the time scale between the original scope of works being drawn up, but also increases in costs for various reasons, latterly availability of materials due to Brexit and Covid. This meant we had to revise our grant targets and the work at each stage had to wait until we had sufficient grant money promised. Timings were sometimes tight.

Phase Two cost £134,000 of which 7% was from local fundraising; 25% from Connexion, Circuit and Hunter Rowe Trust and 68% from a landfill grant.

Phase Three expected final sum: £408,000 of which 10% will be from local fundraising, 54% from Methodist sources and 36% from other grant bodies.

Some outcomes
The new frontage and, in particular, the safety panels reflecting the river and nature reserve opposite, have raised a lot of interest in the whole building. Whenever the premises have been open, folk have taken the opportunity to come in and look around. New people have come to worship. New bookings have been taken for the community rooms. The weekly coffee mornings have been moved into the church where passers-by can see in and feel more able to try us out.

Our user groups delighted with the facilities we can now offer. We can offer full accessibility, Wi-Fi, loop and smart TVs in all rooms. Our worship space and upper room have drinks serveries. We have a new family toilet at the main entrance which is used by groups hiring that space and also for our outreach work onto the riverside frontage.

Plans are in hand to expand our youth work and start Sports Church in our large, comfy meeting room upstairs which has its own drinks servery, TV and Wi-Fi.

Having the whole premises refurbished and redecorated at the same time means we have been able to make a completely fresh start. We were able to run our colour schemes through the whole building, which gives our premises a sense of one-ness. As well as ensuring that our maintenance is all up to date, we have safeguarded our heritage in as many ways as we could. We have established a maintenance schedule to try to ensure that the building remains in good order for the future.