Porthkerry Road Methodist Church and Barry United Reformed Church used to worship in two large traditional Churches on opposite sides of the same road.  A vision that the two Churches could join together and move to the newly developing Waterfront at Barry was to be 20 years in coming to fruition. This would probably have put everyone off had we known that in 2002, which is when the first commitments were made to a new church and community building in the masterplan for Barry’s Waterfront development (formerly Barry Dock). The development proved to be a long process and at times it seemed that it would never happen.  After several false starts, an Ecumenical Sharing Agreement was signed in 2010, culminating in the forming of Barry Uniting Church in 2013. By this time, plans for the new building still seemed very far off, but the church decided to step out in faith and create a community garden on the new site with funding from Welsh Government. Shortly afterwards both church buildings were sold and the joint congregation moved into a temporary demountable building placed in the garden in 2014.

The vision for the new building was to spread God’s mission and create a fit-for-purpose, Eco friendly building, that would offer community-based activities as well as enabling local community members, whatever their background or beliefs, the chance to experience the life and care of our church family.  During the development stage, the name ‘The Bridge Between’ was chosen for the new building to reflect how the building would link the congregation with the local community. 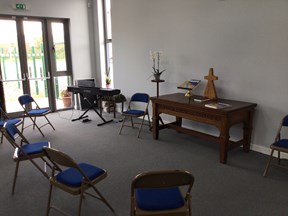 It was another 7 years before The Bridge Between was built.  During this time whilst the legal aspects including funding sources, building design/planning permissions were being processed, we continued to worship in the ‘hut’ as our temporary building became known, and the garden surrounding the ‘hut’ continued to be developed by volunteers from the church and wider community.

We were somewhat naïve at the beginning and thought we could source/secure the funding ourselves.  It soon became apparent that specialist knowledge was required and a qualified Project Manager/Fundraiser was appointed. Once we had made this appointment, whilst there were still set-backs along the way, designs for The Bridge Between started to take shape and the funding package evolved. As well as the official funding route the congregation continued to fund-raise including Car Boot Sale, Coffee Mornings, Knitting Sales, Barbecues, a Duck race challenge and many others. 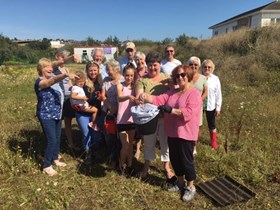 Many environmental aspects had to be considered prior to and during the build.  Our ecological survey revealed no bats or great crested newts were present, however there appeared to be a healthy slow worm population on the site. Before any building work could start the slow worms had to translocated to an area away from the building site and prevented from returning by screening the perimeter of the site with a low plastic screen. Between August and October 2019, volunteers were recruited to check for and collect slow worms twice a day. During that period, 156 slow worms were relocated. The screens were removed once the building work was complete and the slow worms have been spotted once again in the area. The Bridge Between was built to BREAM excellent standard which includes solar panels on the roof, underfloor heating (via water-pipes), automatic light sensors, sound-proofed sliding wall panels that allows alternative use of the space and automatic closing of roof-lights if rain is detected. The building also houses a Changing Places toilet facility, providing an adult sized changing room with toilet and showering facility for people with multiple disabilities. This will allow people who need specialist facilities to be able to visit Barry in the confidence that appropriate changing facilities are available. Barry Uniting Church achieved an Eco Church bronze award in Spring 2020. This ethos has influenced our work on the garden and planning of the building and continues now that we are occupying the new building.  The land around The Bridge Between is being landscaped to link it into the existing community garden using materials provided through a Local Place for Nature materials grant from Keep Wales Tidy. Our dedicated volunteers have already laid a wild-flower turf lawn and planted 100+ tree whips and 500+ naturalising bulbs.  There is still a long way to go until the work is complete but the garden has provided many opportunities to link with local people and form new friendships.  We are also grateful to TCV and the Vale of Glamorgan Local Nature Partnership for their support in providing trees and a new pond liner. The Bridge Between centre opened its doors in July 2021, but we have had to contend with COVID restrictions like everyone else. During COVID the ‘hut’ was too small and worship moved on-line but since July, our new flexible space has enabled us to worship together once more and we have already welcomed a number of new attendees from the local community.  The community café has opened which is run via Purple Shoots, one of our partners. The rooms are being used by various organisations for fitness classes, health and wellbeing, yoga, cookery courses, crafts, independent living as well as numerous church led groups.  We are encouraged that all this has been able to happen whilst still following COVID safety guidelines.

We have also opened an emergency collection point once a week for the Vale Foodbank.  This means local people who need to use this facility no longer have to travel to the main Foodbank elsewhere in Barry. We are very grateful to the following funding providers who have enabled the building of The Bridge Between Community Centre and we look forward to the future as the centre evolves and feel already that our vision has become reality and our continuing mission to spread God’s work will be a fruitful one.

Click here to find out more information about The Bridge Between in Barry.