Mary and Joseph came to the temple 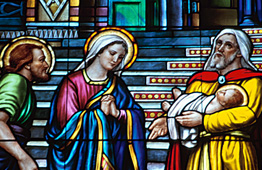 Andrew Pratt's hymn gives a straightforward re-telling of the biblical narrative. Unlike Thomas G. Wilkinson (who reflects on the same story in Through long years of watchful waiting, StF 232), Andrew devotes one verse to the older woman in the story, Anna. She is described as a prophet and, like the "righteous and devout" Simeon, understands that the coming of the baby Jesus is bound up with the redemption of Israel.

In the final verse, Andrew alludes directly to the prayer that Simeon utters on seeing the baby Jesus. This prayer, known as the Nunc Dimittis, is given at StF 794: Now, Lord, you let your servant go in peace.

This hymn is written in the metre 55.54.D, familiar to many from singing Eleanor Farjeon's hymn Morning has broken to the tune "Bunessan". Valerie Ruddle's tune uses a different rhythm but she acknowledges the relationship between the two tunes by naming her own with an anagram of the older melody: "Bensunas".