Ride on, ride on in majesty!

The name of Georg Wittwe comes up frequently in connection with the tune Winchester New but no-one of that name existed. The tune that nowadays takes this name was first published in Hamburg in 1690 – perhaps in Musicalisch Handbuch der geistlichen Melodien à Cant. et Bass, published by Margarethe Rebenlein. 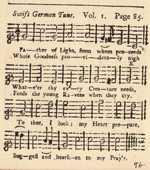 No one knows, though, who actually wrote the tune. Even the name of the book in which the original version of Winchester New can be found varies considerably between different sources, but all agree that its place and date of publication were Hamburg, 1690.

The tune was set to Georg Neumark’s ‘Wer nun den lieben Gott läßt walten’, a hymn to which Neumark wrote a magnificent tune which is still used to this day (including in the 2002 German Methodist hymn book) – although compilers over the years, including Rebenlein in 1690 and Hymns and Psalms in 1982, have had other ideas! 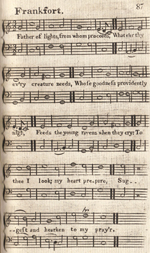 "Frankfort" - a version of the tune in triple time

John Wesley learnt the Rebenlein tune from the Moravians and shortened it to Charles Wesley’s favourite ‘six lines of eights’ metre, publishing it in the oddly-named ‘A Collection of Tunes, Set to Music, As they are commonly SUNG at the FOUNDERY’ (known as the Foundery Collection, 1742).

George Whitefield (Divine Musical Miscellany, 1754) was the first to give the tune the name Winchester New when he changed it into triple time. This version also appeared in Wesley’s Sacred Harmony.

William Henry Havergal (Old Church Psalmody, 1847) revised it to the version we are familiar with.