God in all our experience – the hymns of Ruth Duck

What does the American hymn writer Ruth Duck bring to Singing the Faith? As a writer for over 40 years of over 150 hymn texts and countless liturgical resources, does she offer particular themes or qualities that add to the range and quality of our sung worship? 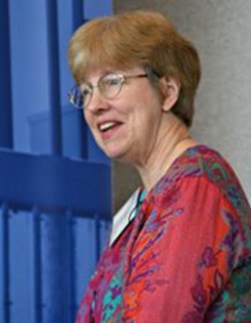 To many, Ruth is known for advocating inclusive language in worship and hymnody. This was, she says the impetus for her first hymn-writing. Initially, she adapted existing texts in order encourage the use of what was then called “non-sexist language”. Subsequently, out of her experience in local ministry, she perceived a need for written words in worship that reflected “sensitivity to inclusive language or to the more contemporary language used in churches since the publication of the Revised Standard Version of the Bible”. This resulted in compilations such as Bread for the Journey: Resources for Worship, first published in 1981.

According to United Church of Christ clergywoman Dee Brauninger, Ruth has used 70 ways of naming God in her hymns. Ruth herself writes: “For centuries the Church has worshiped and sung using only a few, mostly masculine, names and images for God, but in the last thirty years, many churches are expanding their repertoire of language from Scripture, tradition and contemporary experience. I have been part of that expansion. . .”

This priority is present in all her hymns in Singing the Faith – but it’s not front and centre as it is, for example, in her notable hymn “Womb of life, and source of being” or in her contributions to the ecumenical 1970s worship collection, Sing a Womansong.

Nor, for the most part, does Singing the Faith draw upon Ruth’s creative and academic interest in our experience of God-as-Trinity. The exception to this is God who made the stars of heaven (StF 7), with its exploration of God – and God’s people – as “light of the nations. . . making all things new”.

However, what that last line, quoting the book of the Revelation, does remind us is that all Ruth Duck’s hymns are imbued with references to scripture. When we are tested (StF 240) draws on the story of Jesus’ temptation in the wilderness to explore our contemporary pressures as Christians; Come, now you blessed, eat at my table (StF 695) sheds unexpected light on Jesus’ parable of “the great banquet”; and in God, how can we forgive (StF 613), Ruth finds answers to that recurring question in the story of the woman caught in adultery (John 8) and references to Roman 8 and Matthew 6.

These biblical allusions never feel forced – they simply emerge, as they did for Charles Wesley, out of a deep knowledge of scripture that informs all Ruth’s thinking. In part this is because she grew up in a family of committed evangelical Christians to whom she gives full credit for her subsequent work. In an interview in 2010 she said: “My roots are dug deep in the Bible belt, and I had read the Bible all the way through twice by the time I was twenty. . . Since I have been praying with scripture all my life, the words and images of scripture are a part of me, not as inerrant facts, but as life-transforming words of life that point to God the source, the Christ and the Spirit.”

She suggests that it is this quality above all that has resulted in her hymns being taken up by so many Christian denominations around the world. “The Scripture resonance of my hymns makes my words recognizable to people who might not want to sit at the same table.” 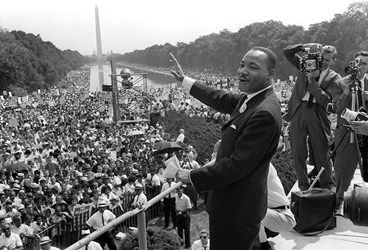 There’s also another vital feature that threads through Ruth Duck’s hymns: a desire to see justice done – not just in a final emergence of God’s eternal dream for creation but in the here and now. The present tense is evident not only in Ruth’s more overt “Revelation” hymn in Singing the Faith (There is a new heaven, StF 738) but in her particular prayers for justice, not least for women: Sacred the body (StF 618) and Pray for a world where every child (StF 527).

Ruth has written about growing up in Memphis, Tennessee, and of the impact on her of Martin Luther King’s ministry and death in that city: “I learned that justice is at the heart of faith and Christian practice.” It’s hard not to sense echoes of King’s preaching (in particular his “I have a dream” speech - image right) underlying, for example, Ruth’s description of a society in which “distinctions, divisions which hurt and destroy will all disappear” (There is a new heaven, v.2).

Ruth says she seeks to “create words that particular communities can sing to express their hope and their commitment to act so that God’s will be done ‘on earth as in heaven’”. She brings biblical understanding to her hymns, and marries this (as the Wesleys did) with tradition, reason and personal experience. “My experience of exalted praise and painful chronic disease, betrayal and abuse, joy and love are material for my hymns,” she says.

As a minister of local churches in Illinois and Wisconsin, and as a professor of worship at Garrett-Evangelical Theological Seminary (also in Illinois) for 27 years, Ruth has sought words that will help congregations unpack God’s vision and Christ’s example in their lives. With striking, contemporary phase-making (see especially Pray for a world, StF 527), Ruth brings (to quote her mentor, the theologian Don Saliers) “the full stretch of humanity” to her writing. This, in the end, is the gift she has brought to Singing the Faith, as to many other hymn books around the world.

[These notes draw on a number of sources but, in particular, Ruth Duck’s own chapter in Janet Wootton, ed., This is our song: women’s hymn-writing (London: Epworth Press, 2010) and Ruth’s interview for Different Voices, issue no.7, 2010. Image above: Ruth Duck addressing the Uniting Church in Australia Assembly Worship Working Group in Adelaide, 2017.]