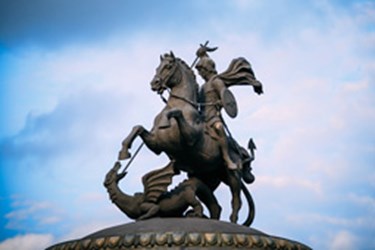 Part 3 in our series of articles about the United Kingdom’s patron saints, and the hymn traditions they represent. See For all the (patron) saints.

What does the life of St George’s say to us?

As saints go, St George is something of a multi-tasker. According to one researcher, he is patron of soldiers, cavalry and chivalry; of farmers and field workers, Boy Scouts and butchers (though St Adrian would challenge him for some of those); of horses, riders and saddlers; and of sufferers from leprosy, plague and syphilis.

On slightly firmer ground, one can say that England shares St George with, amongst others, Istanbul, Palestine, Moscow, Lithuania, Aragon, and (unsurprisingly) Georgia. As the former UK Home Secretary Jack Straw points out (see below), if George ever came to England, it wasn't for long.

We know very little about St George. In 496 AD, Pope Gelasius said of him that he was among those saints “whose names are rightly reverenced among us, but whose actions are known only to God”. 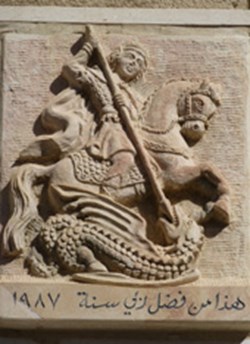 What seems likely is that George was born in Turkey to a Palestinian mother. Perhaps following in the footsteps of his father he became a high ranking soldier in the Roman army, serving under the Emperor Diocletian. However, he protested against the Emperor’s persecution of Christians, refused to renounce his own faith, and was executed as a result.

The legend of St George and the Dragon may be an allegory of the persecution by Diocletian (the ‘dragon’) of Christians, though the story also echoes the Greek myth of Perseus and the virgin Andromeda. (See below for two articles that explore St George’s story and the many ways in which he has been honoured by Christians and Muslims alike over the centuries.)

Following the way of Jesus

So, for what do we reverence George as England’s patron saint? And what hymns might do justice to his example? 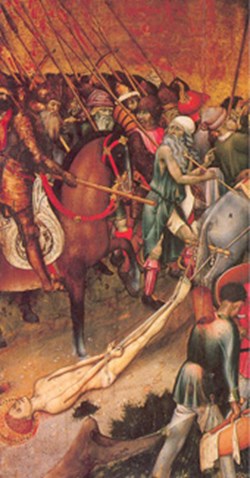 Saint George dragged through the streets, by Bernat Martorell

One clue is in the banner of St George – the red cross of a martyr on a white background. It underlines the ultimate price paid by George for his commitment to Christian discipleship. (Though as part of the uniform for English soldiers, possibly during Richard I’s reign – and so associated with the Crusades – the image offers some food for reflection nowadays.) Here was a man who had choices but responded to Jesus’ clear directive: “If any want to become my followers, let them deny themselves and take up their cross and follow me.” (Matthew 16: 24 cf. Luke 9: 51-62 and Jesus’ words to his disciples on the road to Caesarea Philippi, Mark 8: 34-38).

We may perceive in St George an example of courage, self-denial and determination in defence of the Christian faith. As one also said to have come to the rescue of maidens in the clutches of dragons, and (more likely) to have given away his wealth to the poor once his impending fate became clear, George also offers an example of radical care for those in need.

What hymns will be sing?

Taking George’s profession as a starting point, it’s easy to associate him with hymns that combine military imagery and Christian commitment, often drawing on the writings of St Paul: Fight the good fight (StF 634) and Soldiers of Christ, arise, and put your armour on (StF 637) for example. But more appropriate still, perhaps, is Martin Luther’s mighty version of Psalm 46 (StF 623):

A safe stronghold our God is still,
a trusty shield and weapon

Luther asserts the failure of human weaponry (endeavour) to make God’s Word reality; this is only achieved by committing ourselves solely to the way of Jesus:

With force of arms we nothing can,
full soon were we down-ridden;
but for us fights the proper Man
whom God himself hath bidden.

Similarly, as Aaron Keyes puts it in StF 633 (also drawing upon a psalm – 62): “My soul finds rest in God alone, / my rock and my salvation; / a fortress strong against my foes, / and I will not be shaken.” Here are words that seem to get to the heart of what St George might helpfully mean for us today. Likewise W.J. Sparrow-Simpson’s hymn of the Church community, All for Jesus – all for Jesus… for we have no hope, nor Saviour, if we have not hope in thee. (StF 341)

Other hymns also explore the very great demands made of us when we commit to taking up the cross and following Jesus – demands often forgotten in places where religious tolerance is taken for granted, but which are nevertheless made real for many across the world on a daily basis.

John Keble’s New every morning (StF 137) speaks of the self-denial required to bring us daily nearer to God (v.5), while Love Maria Willis subverts Psalm 23 in her hymn, Father, hear the prayer we offer (StF 518):

Not for ever in green pastures
do we ask our way to be;
but the steep and rugged pathway
may we tread rejoicingly.

And for a hymn that expresses St George’s decision to stand up for Christians suffering oppression, as well as his fabled commitment to those unable to help themselves, we might turn to the clarity of StF 702: I will speak out for those who have no voices:

I will stand up for the rights of all the oppressed;
I will speak truth and justice;
I’ll defend the poor and the needy;
I will lift up the weak in Jesus’ name.

But let us not deny the value of the image of George the soldier. There are tensions and paradoxes to be explored in the life of St George – some of them unpacked in John Bell and Graham Maule’s striking text, To be a soldier (StF 133), with its determined tune, “Miles Christi” (“Soldier of Christ”). How better to summarise the ultimate legacy of St George than in the realisation that, to be a soldier requires us to “confront more than the human foe” and “calls for courage to bring the poor release… and break rank obeying the power and Prince of peace.”

Perhaps Jan Struther wasn’t far from the mark when she penned her children’s hymn “When a knight won his spurs, in the stories of old” and harnessed the language of The Boy's Own Paper to conclude:

Let faith be my shield and let joy be my steed
'Gainst the dragons of anger, the ogres of greed;
And let me set free with the sword of my youth,
From the castle of darkness, the power of the truth.