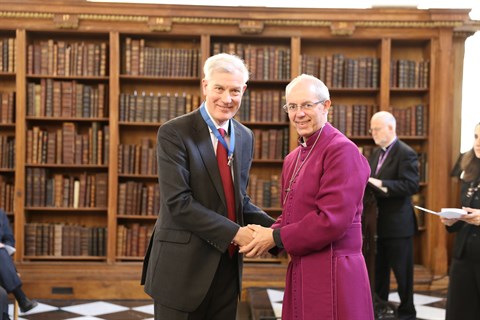 A former Vice-President of the Methodist Conference (2002-2003) and Emeritus Professor of Clinical Medicine at the University of Leeds, Professor Peter Howdle, has been awarded the Lambeth Cross for Ecumenism by the Archbishop of Canterbury, the Most Revd Justin Welby (pictured).

Professor Howdle received the award for "his outstanding contribution to Anglican-Methodist relations" following his dedication to the cause over the past 15 years.

Through his continued efforts Anglican-Methodist relations have shown significant improvement over the years and he is now developing proposals for the interchangeability of ministry between the two Traditions through the Joint Faith and Order Ministry and Oversight Group.

On receiving the award, Professor Howdle said: "I'm delighted to receive this award and feel very honoured. I feel that it reflects the importance of the work of the JIC and is a great encouragement to local ecumenism.

"The joint Faith and Order bodies of our Churches have been working out the practical implications of the recommendations and their report will be published later this summer. If eventually accepted by both Churches, we shall be 'in communion' with each other, allowing for a much closer working together in our mission to the community and to the nation."

The Revd Anne Brown, Chair of the Methodist Leeds District, said: "The District is delighted to hear of this honour and are proud of the contribution Professor Howdle has made towards ecumenism on behalf of the Methodist Church."