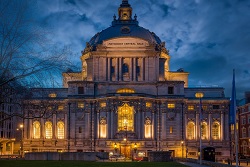 To celebrate UN day, Central Hall will be joining iconic monuments, buildings, statues, bridges and other international landmarks in being bathed in blue lights. Pictures will be broadcast across the world through social media under the hash tag #UN70.

Methodist Central Hall Westminster has a special significance in the history of the UN having hosted the first ever meeting of the United Nations General Assembly in 1946.

As well as turning blue, Central Hall is holding a unique 'UNEARTH Exhibition' for eight weeks, celebrating the achievements and history of the UN over the past 70 years.

Revd Dr Martyn Atkins, Superintendent of Central Hall said "It was entirely fitting that a body devoted to fostering and facilitating international cooperation should have begun its life in a place dedicated to the service of God. Almost 70 years on, we are delighted to join with other buildings across the world to celebrate the vast achievements of the United Nations in such a visible and dramatic way. We express our heartfelt thanks to the UN for all that has been achieved and join people throughout the world in prayer for the UN's current and future work and role."