The New Room (John Wesley's Chapel) in Broadmead, Bristol, is the location for some of the most dramatic scenes in Poldark series 2. The long awaited second season of the hit show returns to BBC1 on September 4th.

Top secret filming took place at the chapel, which is the oldest Methodist building in the world, in October 2015. The 18th-century building was transformed into a courtroom, where Ross Poldark  goes on trial accused of murder, wrecking and inciting a riot. Series 1, screened last year, ended on a dramatic cliffhanger when he was arrested (actually on the Cornish cliffs) by soldiers.  The chapel is expected to feature in the first episodes of the series as Ross is brought to trial.

The team from production company Mammoth Screen had to completely hide all modern trappings in the chapel before filming could go ahead. This meant removing electric light fittings and bulbs, covering radiators and removing all modern signage.

The chapel was then transformed into a courtroom complete with dock, tables for the prosecution and the defence, with the pulpit taking the role of the judge's seat.

Manager of the New Room, David Worthington, said: "Poldark is set in the 18th century so even though we are in Bristol rather than in Cornwall, the building fitted perfectly as the location for Ross's trial.

"All the staff enjoyed meeting the cast and crew and we hope that everyone will enjoy seeing the New Room on screen, especially in such dramatic scenes."

'The Methodies' of Cornwall are often referenced in the Poldark books by Winston Graham. Founder of the New Room, John Wesley, visited to Cornwall  thirty-two times between 1743 to 1787 and preached the Christian gospel many times, often to miners, fishermen and their families.

Initially Wesleyan Methodism flourished in Cornwall - but in 1815 a distinctively south-west kind of Methodism emerged, the Bible Christians.  When the mining trade in Cornwall collapsed, many miners emigrated taking their skills, Methodism and Cornish pasties to mines worldwide, but especially Australia and Canada.

You can read family histories at www.mybiblechristians.org.uk
To find out more about Methodist heritage in general, please visit www.methodistheritage.org.uk or the Church's  website www.methodist.org.uk 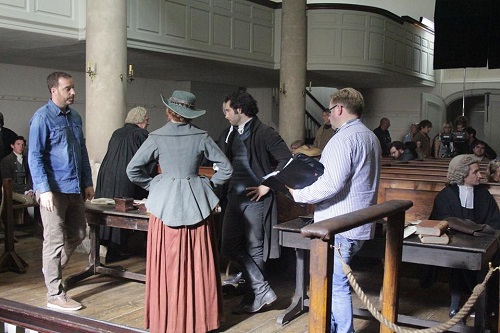