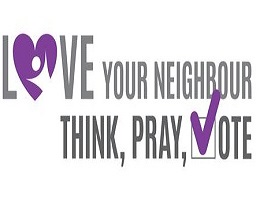 Extra tickets have been made available for those wishing to attend the Archbishop of Canterbury's keynote address at an upcoming public issues conference. The event is organised by the Joint Public Issues Team (JPIT) of the Baptist Union of Great Britain, the Methodist Church and the United Reformed Church.

Full day general tickets for the 'Love your neighbour: Think, Pray, Vote' conference - to be held at Coventry Central Hall on Saturday 21 February - have now sold out. Demand for spaces was so high that the organisers have worked with Coventry Central Hall to make extra tickets available for those wishing to attend the Justin Welby's keynote address, the following Q&A and the opening worship - which will open the conference and set the scene for a day of reflection, discussion and Bible study. The conference will focus on the ways in which churches and individual Christians can help create a more just society in the build-up to the UK's general election on 7 May 2015.

Mr John Ellis, moderator of the General Assembly of the United Reformed Church, said: "It is great to see so many people wanting to attend the 'Love your neighbour: Think, Pray, Vote' conference. Although we can't offer extra full day tickets for the conference, we hope that by enabling people to attend Archbishop Justin's address, they will get the chance to find out more about how Christians can work together and engage effectively on social issues in the run up to the General Election."

Revd Ruth Gee, ex-President of the Methodist Conference who is delivering the closing speech at the event said: "I am delighted to be taking part in the Love your neighbour conference, and thrilled that so many people want to come and explore what Jesus' command means in the context of the general election.  It's great that more people will now be able to hear the Archbishop of Canterbury's contribution to that conversation."