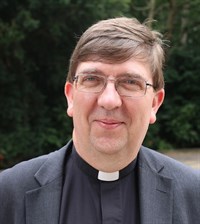 Jonathan will be replacing the Revd Helen D Cameron, who is moving to become the Chair of the Northampton District of the Methodist Church.

Jonathan trained for the Methodist ministry at Wesley House Cambridge from 1987-90, and spent a year prior to his first station at the Pontifical Gregorian University in Rome. His widespread experience of ministry has been gained through serving in a variety of places and roles across the country over the past 26 years.

Throughout his ministry, Jonathan has maintained a rigorous approach to scholarship, reading for his PhD while a circuit minister. From 2011-14 he served as Vice-Principal of Wesley House Cambridge, and since 2014 he has been serving as Ministerial Co-ordinator for the Oversight of Ordained Ministries in the Methodist Connexional Team.

Jonathan Hustler brings to the role of Assistant Secretary of the Conference a reflective, informed, faithful and compassionate style of ministry, which will undoubtedly foster the vocations and gifts of others as he celebrates the presence of God.

In response to the news, Jonathan said: "It is an honour to be asked to serve as an officer of the Conference and I am humbled by the trust that the Conference has placed in me. I am conscious both of the great tradition in which the Conference works to discern what God is saying the Church and of the challenges that we face in the present age, and I feel hugely privileged to be called to this office at this time."