Into the darkness of this world

This is a text that suggests a strongly visual expression. Though the logistics would have to be worked out in each particular setting, the hymn's opening words ("Ino the darkness of this world, into the shadows of the night...") cry out to be sung in a dimly lit (or even dark) environment. For example, have the opening verse sung by a small group of people around a candle(s) and add more lights to the room or sanctuary as the hymn progresses - or when the rest of the congregation requires them to read the words!

The syncopated melody works well with guitars (StF includes the chords) and other instruments.

This is an Advent hymn that doesn’t shy away from the burdens, the pain, the heavy hearts and the broken places with which we are all well-acquainted at different times in our lives, and with which many live continually. At the same time, the hymn's refrain expresses the faith to petition God-in-Jesus to “Come with your love / to make us whole”.

Maggi Dawn wrote "Into the darkness" in 1992, in response to a request from her local parish priest, Vicar John Sentamu (now the Archbishop of York). "He was always looking for ways to encourage musicians to produce new and interesting music for the Church. I had already written quite a number of short songs, and one day he said to me, 'What we really need is some new hymns – and Advent is coming up. Don't write about Christmas. Write about Advent.'" 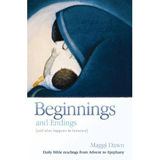 That request led to more than just one hymn, writes Maggi. "'Into the darkness' was my response to his request, but in the process of looking into the themes of Advent I began to be intrigued as to why we rush into Christmas without paying enough attention to Advent. I wrote a good deal about it on my blog, and subsequently wrote a whole book of Advent reflections (Beginnings and Endings, published by BRF). So the vicar's request for a song turned out to be a much bigger project than either of us imagined!" 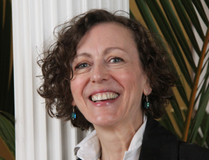 Maggi Dawn is an ordained priest in the Church of England. She is a musician and theologian, and as a church musician and singer/songwriter she has been a prolific writer and performer of contemporary songs and hymns. (Wash me clean in that cool river is also included in Singing the Faith - 453.)

Currently, Maggi works at Yale Divinity School in the U.S. as Associate Dean for Marquand Chapel (the main space for practising and learning about worship at Yale, and described as the School’s “beating heart”). Previously, she had been chaplain at Robinson College, Cambridge. Maggi serves on the advisory board for the Royal School of Church Music and is also a senior member of King's College where past responsibilities have included organising “Carols from Kings” for BBC TV and the “Festival of Nine Lessons and Carols” for radio.

Read an interview with Maggi ("a woman for all seasons") published in Yale Divintiy School's Reflections magazine.