Meekness and majesty, manhood and deity (StF 362)
O for a thousand tongues to sing (StF 364i)

My Jesus, my Saviour 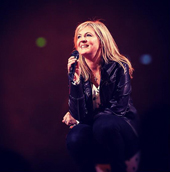 Australian Darlene Zschech is a well-known as a singer, songwriter, worship leader and speaker. Over many years, she was involved in the worship and music publications of Hillsong Church, Sydney, the largest Pentecostal "mega-church" in Australia, with many branches around the world.

Out of her own life experiences (which included, as a young teenager, the divorce of her parents and struggling with bulimia), Darlene has not only found ways of expressing her faith in song but also used her position to address issues near to her heart. In 2001, for example, she and her husband Mark helped launched Mercy Ministries Australia, a branch of Mercy Ministries of America, a non-profit organisation that claims to provide free housing and hope to teen girls struggling with pregnancy, drugs, abuse, and eating disorders – though these claims have caused controversy in recent years.

In an article for Today’s Christian Woman (March 2001), Camerin Courtney quotes Darlene Zschech (pronounced “check”) as saying that “Shout to the Lord”, written in 1993, was written during a time of great discouragement.

“At the time, Darlene and her husband, Mark… had two babies, and with a struggling motorcycle-parts business, money was tight. It was during one particularly stressful day that Darlene snuck into the toy room where they kept their piano and put into song the spiritual truths to which she desperately clung: ‘Mountains bow down and the seas will roar at the sound of your name,’ and ‘Nothing compares to the promise I have in you.’ 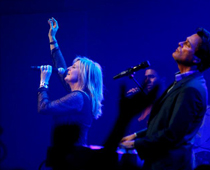 The song was released by Hillsong Music Australia, the praise and worship label of Hillsong Church. The church is the hub of the international Hillsong Conference, of which Darlene and Mark were associate directors. In 1996, “Shout to the Lord” became the title cut of a gold-certified worship album released in the U.S. by Hosanna! Music.

In 2006, Mark and Darlene Zschech founded Hope Rwanda, now HOPE: Global – a “faith-based, no-profit organisation that operates to restore hope and justice to countries devastated by war, genocide and poverty”.