My soul rejoices in God my Saviour

This paraphrase of “The Magnificat” (see below) includes a refrain with a descant that can be taken up by a choir, soloist, or a section of the congregation. Note that the accompaniment towards the beginning of the refrain is slightly different to the main melody (bar 2). The accompanist can either make the congregation aware of this beforehand or perhaps mirror the melody for the first couple of refrains.

Given that The Magnificat was originally written down in the Gospel of Luke as the prayer of one person, it would be appropriate and effective for the short verses to be taken by a solo voice (preferably female). If the congregation has only to pick up the refrain, there is added scope for planning the hymn as a processional for the congregation to enter or leave worship. The simple, two-sentence refrain can be taught and then sung without the need to hold hymn books.

Owen Alstott’s hymn is one of a number included in Singing the Faith that paraphrase, or are inspired by, the song of Mary, Jesus’ mother, in Luke 1:46-55. Timothy Dudley-Smith’s Tell out my soul (StF 186) is a familiar paraphrase. There are echoes, too, in Charles Horne’s Sing we the King who is coming to reign (StF 185), while John Bell’s Heaven shall not wait (StF 701) is a modern, angry cry for justice that draws on Mary’s prophecy of a society turned upside down by divine values.

Mary’s song, known as “The Magnificat”, itself echoes the song of Hannah, Samuel's mother (1 Samuel 2:1-10) – proof, if it was needed, that the message of God’s justice is a constant theme running throughout the Bible. The American Franciscan writer and speaker, Richard Rohr, writes of Mary’s words:

“The ego-liberated attitude of Mary is the language of allowing, receiving, surrendering, trusting… It was once considered against the law to recite this prayer at public demonstrations in Argentina. (You have to give them credit for seeing the immense political implications of this seemingly sweet and pretty prayer.)”

The Magnificat is available as a responsive reading in the Canticles and Psalms section of Singing the Faith – StF 793. 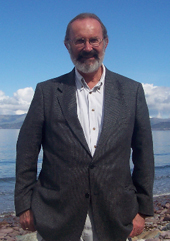 The American writer and musician Owen Alstott writes from and for his Catholic tradition. He began writing music for the liturgy in the 1960s, soon after the end of the Second Vatican Council. From 1975 until the early 1990s, Owen worked as an editor and publisher at Oregon Catholic Press in the United States. In 1992, he moved to London where he lives and works today, running a small company, Viewpoint Resources Direct. Viewpoint Resources publishes and distributes religious education materials as well as a small amount of liturgical music.

Owen is married to Bernadette Farrell, also represented in Singing the Faith.