When I'm feeling down and sad

This song/hymn speaks to many individuals, not least older church members, who feel that they are being overtaken by change and left on the sidelines, isolated and lonely.

When no-one has time for me,
nothing’s like it used to be,
help me to remember,
you are still with me.

(Compare this with Rosemary Wakelin’s challenging The world we thought we knew is changing fast, published on StF+).

One Methodist local preacher contacted StF+ to say that, though “When I'm feeling down and sad” is not a song she would normally have picked for a service, it had been brought to her attention by a member who had found it helpful as she coped with bereavement. “I introduced it as a prayer during worship and, as the tune was not familiar and the essence of the words was important, we listened to it read and then reflected while the tune was played. The feedback was very positive – people really appreciated it.” 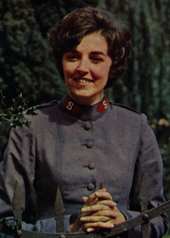 Captain Joy Webb was one of the founders of a 1960s pop group The Joystrings, made up of members of the Salvation Army. They achieved UK chart success with On A Starry Night (StF 206) and "It's An Open Secret". Like other of Joy’s songs – including “When I’m feeling down…”, this combined a memorable melody with a strong expression of personal faith:

(Listen to the Joystrings perform "It's an open secret" on YouTube.)
Founded in 1963, The Joystrings was a “Christian beat band”, formed specifically for an appearance on Cliff Michelmore's BBC Tonight television show and made up of Salvation Army cadets led by Joy.

They caught the audience’s imagination and, following a second appearance, were signed to the EMI label Regal Zonophone (later associated with such performers as Procol Harum, Tyrannosaurus Rex and Joe Cocker). Joystrings released six singles, five EP’s and two LP’s. Joy herself played guitar and keyboard, as well as singing.

“The Joystrings were, for a blink in time's eye, a national phenomenon – a group of Salvation Army cadets who in 1964 made the national pop charts, appeared in full uniform on the groovy Ready, Steady, Go TV programme and were besieged by bemused newspaper journalists intrigued at the idea of a religious group playing ‘beat music’. 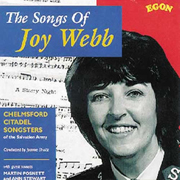 After the band split up in 1969, Joy continued composing. One of her most famous post-Joystrings songs was "Share my Yoke". Arranged by Ivor Bosanko as a trumpet solo, it has been recorded frequently, including by the Black Dyke Mills Band.

When I'm tired and nothing's going right for me;
When things I've counted on just do not come my way;
When in my mind the thick grey folds of doubt arise,
It's then I seem to hear him say:

Share my yoke and find that I am joined with you.
Your slightest movement I shall feel and be there too!
Share my yoke and come the way that I must go!
In our "togetherness" my peace you'll know;
The world beholding us will see it so! 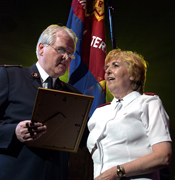 The citation declared: “Throughout her officership, Major Joy Webb has demonstrated outstanding commitment to the creative and innovative use of music, poetry and drama in evangelism and worship, achieving unparalleled success in expressing the gospel in the popular idioms of the day while constantly reflecting the standards of the gospel in her personal life.”