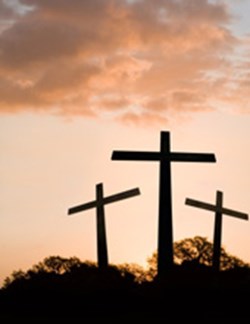 On the New hymns page of StF+, we've added a number texts to complement the 50+ hymns in the Lent and Passiontide sections of Singing the Faith. These are not all brand new - some appeared originally on the Methodist Church website.

Andrew Pratt offers an Easter hymn, subtitled "God's voice made visible" and, in Safe, locked inside that upper room, Marjorie Dobson  once again demonstrates her particular skill of probing familiar biblical stories and translating them into challenging poetry. A more recent addition to Singing the Faith Plus is Andrew T. Murphy's striking text, A new day dawns, which makes explicit connection between the resurrection event and God's creativity at the dawning of creation.

A hymn for Easter Saturday

We've also included Andrew Pratt's hymn, The quaking earth is calm. This may be said to be a hymn suitable for times of bereavement - but what did Jesus' disciples feel following his crucifixion if not (amongst many other conflicting emotions) the grief of bereavement? Here is a hymn ideal for use on the often skipped-over desolation of Holy Saturday: a day on which we can feel, with the disicples, that "nothing good can come of this". Andrew bluntly acknowledges God's pain ("God hung and died") but sings the consequence: "God loves but suffers still; / and loving, will remain."

Richard D. Leach is a prolific American hymn writer and a former pastor in the United Church of Christ. He says:

"I often write in response to particular Bible passages. I try to tell familiar stories in new ways, or listen to less familiar passages for what they might say to us. I want my hymns to enliven those who sing, to give singers something new which they can make their own."

Here, you can download as a PDF two of Richard's texts: "Where was the greater struggle?" and "At early dawn they rise to come".

Download the words and music of At early dawn here as a PDF.

Richard writes about these two texts:

"At Early Dawn They Rise to Come" was motivated by a moment of reflection on Mark 16:3. The women on the way to Jesus' tomb wonder who will move the large stone sealing it. They are not strong enough to do that - yet the are strong in devotion to Jesus, which motivates them to try to anoint his body, not even knowing how they will get to it. And though they are at first overcome with fear, they will have the strength to witness to his resurrection.

"Where Was the Greater Struggle" was written to contrast Jesus' temptation in the wilderness, as told by Matthew and Luke, with several occasions in his ministry that have related themes. It asks whether it is the tempter in the wilderness or the human world that is more difficult to deal with.

To use either of these hymns, you will need a licence that covers copyrights held by Hope Publishing. CCLI and MRL licences do cover both hymns. However, if you're in doubt, you can contact Hope direct - click here.