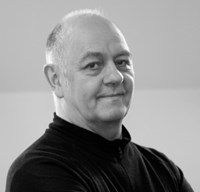 Google the name “Graham Maule” and you won’t find a great source of material in the vast archives of the internet. Google for his image and you’ll find even less. In fact, you’re more likely to find photos of John Bell, his long-time hymn writing partner (and before that, co-youth worker).

This, we are led to feel, was how Graham liked it. But while the name “John Bell” is, for many, ubiquitous with the  notion of re-charging worship and communal singing, and is almost synonymous with the Iona Community’s Wild Goose Group, it is too easy to forget that so much of what John has achieved has been done so with Graham at his side. Together, Graham co-authored with John 25 hymns included in Singing the Faith – well over half of the hymns and liturgical settings with John Bell’s name on them.

The substantial obituary for Graham by Neil Cooper published in The Herald newspaper on 28 January 2020 (download as a PDF) makes it abundantly clear that Graham was much more than a hymn writer, and that the “much more” (liturgist, artist, scholar, campaigner) impacted on and informed the texts he crafted with John.

Read also John Davies’s tribute (Graham Bell: Enemy of apathy) published on the Greenbelt website, and see The Iona Community website for links to the full texts of the Order of Service for Graham’s funeral, together with a full Tribute.

Announcing Graham’s death, the Iona Community lovingly reproduced this text by John and Graham, which can be sung to Londonderry Air (StF 350)

Go, silent friend, your life has found its ending:
to dust returns your weary, mortal frame.
God, who before birth called you into being,
now calls you hence, his accent still the same.
Go, silent friend, your life in Christ is buried;
for you He lived and died and rose again.
Close by His side your promised place is waiting
where, fully known, you shall with God remain.

Go, silent friend. Forgive us if we grieved you;
safe now in heaven, kindly say our name.
Your life has touched us, that is why we mourn you;
our lives without you cannot be the same.
Go, silent friend, we do not grudge you glory.
Sing, sing with joy deep praises to your Lord.
You, who believed that Christ would come back for you,
now celebrate that Jesus keeps his word.