Be known to us in breaking bread

This succinct, gentle, even intimate, communion hymn was written by a radical Sheffield journalist and passionate anti-slavery campaigner, James Montgomery. It was originally published in Montgomery's own The Christian Psalmist (1825) with the heading "The Family Table". A little unusually for a communion hymn, the words draw their inspiration not so much from the story of Jesus' last supper before his crucifixion so much as from the post-resurrection story in which Jesus joins with two believers on the Emmaus Road (Luke 24: 28-31, 35). There are also suggestions of John 6: 51: "I am the living bread that came down from heaven. Whoever eats of this bread will live for ever; and the bread that I will give for the life of the world is my flesh."

Four hymns by James Montgomery are included in Singing the Faith, amongst them two hardy perennials associated with the Christmas season: Angels, from the realms of glory (StF 190) and Hail to the Lord's anointed (StF 228). He wrote around 400 more. 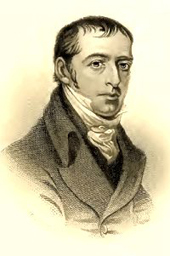 Though he had written poetry of all kinds since boyhood, Montgomery once observed that none of them would stand the test of time – except perhaps a few hymns.

Aged 21, Montgomery moved to Sheffield and became assistant to Mr Gales, editor and owner of the Sheffield Register, a radical newspaper. Gales fled the country in 1794 to avoid a political prosecution, and Montgomery took over the paper, renaming it the Sheffield Iris. He was subsequently imprisoned twice in York Castle, once for printing a song celebrating the Fall of the Bastille, and once for printing an account of a political riot in Sheffield. Less controversially, “Angels, from the realms of glory” also made its first appearance in the Iris. 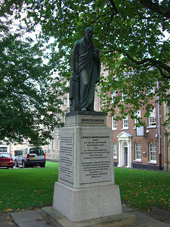