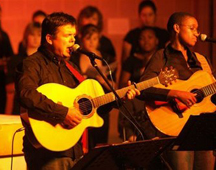 The late Mike Stanley in performance with Jo Boyce

This praise band song is laid out with guitar chords – and is ideal for adding in drums and other melody instruments – but Martin Clarke also offers a new piano arrangement that maintains the simplicity of the original. It’s a song most appropriately sung before or during the distribution of communion, perhaps with a soloist singing the verses.

If you are new to this song it would be worth listening to Jo Boyce and Mike Stanley’s own recording of it, available on their album Age to Age 1: songs for a pilgrim people.

This gentle communion hymn by Jo Boyce and Mike Stanley focuses on the idea that Jesus’ crucifixion was a blood sacrifice that redeems humankind (“our victory”), but also uses the story of God providing food (“manna”) for the wandering people of Israel as a supreme example of the way God fulfils “our every need”. The song comes from the Roman Catholic tradition but makes no specific allusion to the doctrine of transubstantiation associated with the Roman Catholic mass. 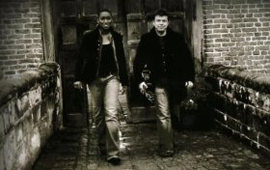 Jo Boyce and Mike Stanley, two of the founders of CJM Music, began working together in the 1990s at Soli House, a residential youth retreat centre in Stratford upon Avon. Though born in Birmingham, UK, Jo (Joanne) had lived in her mother’s home of Trinidad and Tobago from the age of nine. When she returned to England Jo (also a trained biochemist) became music director of Soli House. Mike, a multi-talented instrumentalist had worked as a teacher and youth leader before joining the team at Soli House.

"Bread of Life, Truth Eternal" was the first song Jo and Mike wrote together. Their partnership produced a number of albums and the development of CJM Music, with Chris Rolinson – first as a publisher of their music but evolving into a recording company and music ministry team. The team believes that “catechesis, evangelisation and liturgy are inseparable strands of the life of the Church”. Through schools work, workshops and music performances, CJM Music is committed “to resourcing pastoral musicians, liturgical ministers, worship leaders, teachers and catechists; engaging the skills of young people and to serving the Church through the ministry of music and liturgy”.