"Crashing waters at creation". © 2013 Photos.com, a division of Getty Images

This text was written as a hymn for baptism. It is inspired as much by the imagery of water as by the movements of the Holy Spirit. For that reason, if a baptism is to follow the singing of the hymn, it may be appropriate to complement the singing with the preparation of the baptismal font. Water can be poured into the font as the congregation sings about water.

Alternatively (and especially if no baptism is taking place), have an individual walk to the front of the congregation with a large, clear bowl of water. Use a jug to pour more water in. Don’t worry about it splashing: we are singing about “crashing waters” and water that “stood and trembled”!

The first three verses of “Crashing waters at creation” home in on moments when the power of water and the power of the Holy Spirit unite forces to make God’s presence felt. Sylvia Dunstan draws upon three biblical events:

the creation of the world, at which God’s Spirit is said to hover or blow over the waters (Genesis 1:2)

the delivery of the people of Israel from slavery in Egypt when the waters of the Red Sea parted, allowing them to escape from the pursuing Egyptian army (Exodus 14: 15 – 31)

the baptism of Jesus in the River Jordan and the appearance of the Holy Spirit (Matthew 3: 13 – 17) (see also When Jesus came to Jordan, StF 233) 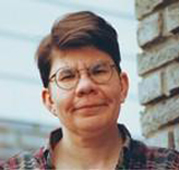 Sylvia Dunstan was a prolific writer (39 texts listed at www.hymnary.org) but she died at age 37, four months after being diagnosed with liver cancer. Go to the world! Go into all the earth is also included in Singing the Faith (StF 402). Her most substantial collection, In Search of Hope and Grace, is published by GIA, who say of Sylvia:

“Born in 1955, Sylvia Dunstan attributes her love of song to her grandparents [with Methodist and Salvation Army backgrounds], who kept song alive in the family and entrusted Sylvia's formal musical education to one of the nuns at the local convent. Sylvia began writing songs in the early seventies and soon after met Sister Miriam Theresa Winter, who encouraged her to write songs based on Scripture. Sylvia eventually realized that her talents did not lay with the music and concentrated instead on the lyrics. She was further shepherded and encouraged by Alan Barthel.”

In 1980, Sylvia was ordained by the Hamilton Conference of the United Church of Canada. During her career she served as a minister, a prison chaplain, and editor of a Canadian worship resource journal, Gathering.

“Sylvia Dunstan died on July 25, 1993… She left behind a ministry that combined a compassionate concern for the needy and distraught with a consuming love of liturgy.”

See Touching the wind: how we describe the Holy Spirit