Though the music is laid out as for a choir, this is a song that can work equally well for a soloist and / or congregation. A soloist or small group might sing it through once with the congregation repeating it after. Alternatively, have a soloist sing the first two lines (”Day by day, dear Lord, / of three things I pray”) and have the congregation join in with the slightly simpler melody that accompanies the rest of the verse.

The Prayer of St Richard of Chichester is a text which, when sung in some settings, can seem to end a little abruptly. However, the way in which David Lee’s rhythm slows us down ever so slightly towards the end, just before repeating the opening phrase, helps to give a satisfying sense of closure to the text. Here, as in other of his tunes, David also repeats or echoes the opening phrase of the melody at the close, allowing singers to feel that they’re “arriving home” at a familiar place. 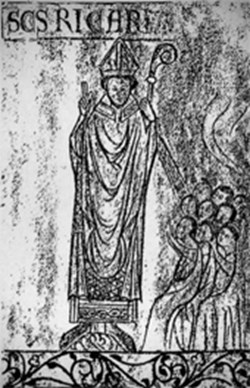 The Prayer of St Richard of Chichester has changed in form over the years since Richard, Bishop of Chichester, died in 1253. (Image right: Medieval era wall painting of St Richard in the nave of Black Bourton church, Oxfordshire).T he original version of the words that have become most familiar were written in the singular and followed words of thanksgiving to Jesus, spoken very much with the thoughts of his crucifixion in mind.

The addition of the words “day by day” at the beginning and end of the prayer, made popular by Stephen Schwartz’s version for the 1971 musical Godspell, were published in the enlarged edition of the pioneering Songs of Praise, compiled by Percy Dearmer and others.

In his reflections on the prayer (Prayers That Live: 1981 SPCK), Frank Colquhoun observes that the first title attributed to Jesus – “Redeemer” – links up this more familiar section of the prayer with the thanksgiving that precedes it. “We cannot think of our redemption in Christ apart from what it cost him: the giving of his life for the sin of the world”. Everything we give thanks for flows from the passion of Christ – his self-giving on a cross. This emphasis comes out even more clearly in the (perhaps earlier) version of the prayer below.

Of the other two “titles” he comments:

Friend: the word is not used of Jesus in the New Testament (“though his critics called him contemptuously ‘the friend of sinners’”) but the idea is there and, “since he calls us his friends we may rightly call him ours – so long as we do what he commands us (John 15: 14-15).

Colquhoun also points out that our prayer to know Christ more clearly is not simply to “know about” but to gain a deeper insight into who he is and what his life and resurrection mean for us personally.

David Lee’s tune “Lindors” is named after the Christian Guild Hotel in the Wye Valley where he and his family have spent holidays.


Lord Jesu Christ, I thank Thee for
all the blessings Thou hast given me,
and for all the sufferings and shame Thou
didst endure for me, on which account that
pitiable cry of sorrow was Thine: " Behold and
see, if there was any sorrow like unto My
sorrow ! " Thou knowest, Lord, how willing
I should be to bear insult, and pain, and death
for Thee; therefore have mercy on me, for to
Thee do I commend my spirit. Amen