Lord Christ, we praise your sacrifice 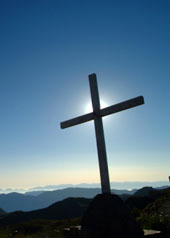 As an immediate response to the events of Holy Week and Easter, Alan Gaunt’s “Lord Christ, we praise your sacrifice” could hardly be better. Succinctly he traces the life and ministry of Jesus from birth (v.1) to death (v.2) and resurrection (v.3), and concludes by asking the “living Lord” to “prepare us now / your willing helplessness to share” (v.4).

Alternatively, just as the verses of a single hymn may be built up to reflect the Sundays of Advent, this hymn might be built up during the services of Holy Week:

While living in Clitheroe in Lancashire (where he was ordained in 1958), Alan began to write hymns. He recalls that “it was Erik Routley [another minister of the English Congregational Church and later Professor of Church Music at Westminster Choir School in Princeton, New Jersey], offering a kindly but frank response to my first eight hymns, who wrote of ‘ruthless precision.’ I have never forgotten that. I may not always achieve it, but I always aim at it.”

Alan's loose-leaf collection, New Prayers for Worship (published in 1972), became influential in the UK and also in Australia and New Zealand at time when churches were seeking a new contemporary language for public prayer. Other prayer collections followed and, for a number of years, he had alternating periods of poetry and hymn writing, sometimes going for five or six years without writing a hymn at all. Perhaps his most well-known hymn, We pray for peace (StF 719), is quoted in The Oxford Dictionary of Quotations:

We pray for peace,
but not the easy peace
built on complacency
and not the truth of God.

In an interview with Douglas Galbraith for the magazine Different Voices (Martinmas 2009, pp.12-13), Alan argues that “a good hymn, I think, should communicate something reasonably obvious when first sung but, at the same time, be offering more. I have always held the view that a hymn is poetry and, like poetry, even at that first singing it might be communicating something rather deeper, even if only in an individual singer’s unconscious mind. Gogol said something to the effect that in every work of art, life takes a step forward: in other words, we are moved to a new place even though the forward step may not be huge.

“People sometimes say, ‘I prefer modern hymns’. They are usually referring to hymns with a particular style of music, but often with words that are far from modern, being the repetition of what might be called biblical clichés. My reply has always been, ‘That’s precisely what I write!’. I mean that I try to write in contemporary language… By that I do not mean the slovenly sort of language so often heard on the radio nowadays. A good hymn is a good poem; and a good poem is written in the best possible language of its own times; which is why some of the best hymns in the language (such as “When I survey the wondrous cross”, StF 287) are still appreciated so many generations on.”

Alan Gaunt's hymns are published by Stainer and Bell.