May the God of hope go with us every day 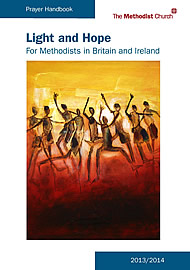 The Methodist Prayer Handbook for 2013-14, inspired by this traditional Spanish hymn

"May the God of Hope" is a song of blessing, justice and peace. Use it when people are commissioned for mission or service projects. It also adds a joyous, upbeat note to the end of a worship service, sending people on their way almost dancing. The Hispanic folk melody has a driving rhythmic pulse, best accompanied by piano or guitar. Rhythm instruments such as bongos, claves and maracas can also be used.

Try learning the refrain in its original Spanish. As Judee Archer Green suggests: “Your pronunciation may not be perfect, but it is a reminder that people worship God all over the world and in many different languages.”
The Spanish version of the refrain reads:

The following is a guide to the pronunciation. NOTE: the number of syllables in each line differs from the English translation and requires practising a different rhythm for the melody.

Verse 1 of “May the God of Hope” echoes the words of blessing offered by St Paul in his letter to the Romans: “May the God of hope fill you with all joy and peace in believing, so that you may abound in hope by the power of the Holy Spirit.” (Romans 15:13)

Also known as “Song of Hope” (“Canto de Esperanza”), this text (originally only with a single verse and refrain) was translated into English in 1984 by Alvin L. Schutmaat. He worked for the Presbyterian Church (U.S.A.) as a missionary to South America where he taught theology and music in Colombia, Venezuela and Mexico. An educator, theologian and administrator, he used the arts to communicate the gospel.

Additional verses have been written for the hymn, including Ann Mitchell's verse included in Singing the Faith. "Voices United: the hymn and worship book of the United Church of Canada" includes the following verse:

May the God of healing free the earth from fear,
freeing us for peace, both treasured and pursued.
May the God of love keep our commitment clear
to a world restored, to human life renewed.

The 2013/14 Methodist Prayer Handbook takes this hymn as a starting point for its theme of Light and Hope. The handbook’s intention is to “look at hopeful discipleship; celebrating signs of hope in the Church, the world, our communities and our lives.”