Once in royal David's city

How could we not begin the singing of this carol with a solo treble voice? It’s the sound that opens the Festival of Nine Lessons and Carols at King’s College, Cambridge, every year and it means the start of Christmas for many millions who hear or see it broadcast worldwide.

But if you don’t have a treble at hand… 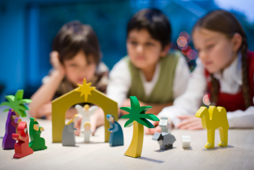 Though in part a re-telling of the nativity story (Luke 2:4-7), this carol is based on the words of the Apostles' Creed, "who was conceived by the Holy Ghost, Born of the Virgin Mary”. Cecil Frances Alexander wrote it to help some of her godchildren understand this element of the catechism, which they were finding rather dull. The carol, originally with six verses, was included in Alexander’s 1848 hymn collection, Hymns for Little Children. This collection also included All things bright and beautiful (StF 100) and There is a green hill far away (StF 284), which attempts to get to the heart of another credal statement: “[Jesus] suffered under Pontius Pilate”.

One writer suggests that the “good mingling of the biblical story and Christian theology” in Once in royal David’s city “sets the nativity of Christ into a much larger framework-the history of salvation. Alexander's words enable us to look back and to look forward from this historic event.” Arguably, that overview of faith history is diminished by the considerable editing that the hymn undergoes from hymnbook to hymnbook.

The stanza beginning “And, through all His wondrous Childhood, / He would honour and obey” is often omitted, perhaps because modern editors find the idea that “Christian children all must be / Mild, obedient, good as he” if not idealistic than unrealistic. The original fourth stanza (also omitted in Singing the Faith) includes the idea that Jesus “was little, weak, and helpless, / Tears and smiles like us he knew”. Perhaps there has been a desire to make the him more adult and, perhaps too, that desire has removed some of the humanity from the life of Jesus that Fanny Alexander, like Christina Rossetti and, indeed, many modern hymn writers, feel it is important to emphasise. 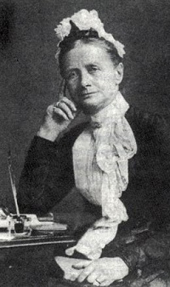 Cecil Frances Alexander (known as “Fanny”) was born in 1818, the second daughter of Major John Humphries in County Tyrone, Ireland. In 1850, she married the Revd William Alexander, later Archbishop of Ireland. Like her contemporaries John Mason Neale and Christina Rossetti, Fanny Alexander was strongly influenced by the Oxford Movement of high church Anglicans who favoured traditional liturgy, symbolism and theology. Her first book of poetry, Verses for Seasons, was a "Christian Year" for children and she is most well-known for her hymns written originally for children. In collections such as Hymns for Little Children (1848), she wrote hymns with accessible language based on the Apostles' Creed, baptism, the Lord's Supper, the Ten Commandments.

Vincent Lenti concludes his overview of Alexander’s life and work in The Hymn (July 1999) by suggesting that “the value of Fanny Alexander’s hymns, successful and unsuccessful alike, may ultimately rest on the simple fact that most of her texts were credal in nature. She most often wrote to explain something essential in Christian belief, to answer and address basic questions of faith rather than describing religious feelings and religious experiences. In choosing to explain essential doctrines, Fanny Alexander dealt with matters no less pertinent today than when written.”