The desolate Messiah dies (StF 283)
Were you there when they crucified my Lord? (StF 285)

There is a green hill far away

Though sung mostly during Holy Week, this hymn’s association with words of the Apostles' Creed – “[Jesus] suffered under Pontius Pilate” – suggest that it can be used at other times in the year when this theme is the focus of worship (see below). The emphasis of the text is weighted towards our loving response to love shown to us by Jesus.

Try singing this hymn as a meditation, pausing after verses 2 and 4 for quiet reflection, and then drawing your thoughts together by the singing of the final verse. 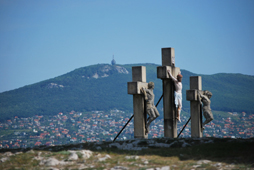 Most of Fanny Alexander’s enduring hymns were written for children and designed to help them understand key statements of the Christian faith. Among them were All things bright and beautiful and the popular Christmas carol, Once in royal David's city (StF 214).

"There is a green hill far away" hymn interprets the phrase in the Apostles' Creed: “[Jesus] suffered under Pontius Pilate”. It sets out to describe for young people the suffering of Jesus as he was crucified. Alexander’s picture of the “green hill far away” in Judea is said to have been inspired in part by a hill near her home in Ireland, which she used to pass by while riding in her carriage. “But her text is less a physical description of Calvary than a basic lesson in the theology of redemption”, writes Vincent Lenti (The Hymn, July 1999).

Nowadays, some may question the idea of a simple equation of Jesus on the cross with a blood sacrifice, but the direct statements of Jesus’ love – “it was for us”; O dearly, dearly has he loved, / and we must love him too” – move us beyond theological debate to an arguable summary of what lay at the heart of the crucifixion event.

Some of the popularity of “There is a green hill” undoubtedly derives from William Horsley’s tune, “Horsley”. Horsley was an experienced musician, a friend of Mendelssohn, and with five books of “glees” (part-songs) and thee symphonies to his name. The unexpected and memorable fall into G major that occurs at the end of each third line of the hymn lends this flowing melody a poignancy that colours our memory of the words.

Cecil Alexander (known as “Fanny”) was born in 1818, the second daughter of Major John Humphries in County Tyrone, Ireland. In 1850, she married the Revd William Alexander, later Archbishop of Ireland. Like her contemporaries John Mason Neale and Christina Rossetti, Cecil Alexander was strongly influenced by the Oxford Movement of high church Anglicans who favoured traditional liturgy, symbolism and theology. Her first book of poetry, Verses for Seasons, was a "Christian Year" for children and she is most well-known for her hymns written originally for children. In collections such as Hymns for Little Children (1848), she wrote hymns with accessible language based on the Apostles' Creed, baptism, the Lord's Supper, the Ten Commandments.

Vincent Lenti concludes his overview of Alexander’s life and work in The Hymn by suggesting that “the value of Fanny Alexander’s hymns, successful and unsuccessful alike, may ultimately rest on the simple fact that most of her texts were credal in nature. She most often wrote to explain something essential in Christian belief, to answer and address basic questions of faith rather than describing religious feelings and religious experiences. In choosing to explain essential doctrines, Fanny Alexander dealt with matters no less pertinent today than when written.”