Have faith in God, my heart

NOTE: This hymn has been cleared by the copyright holder, Mr A.O. Scott, for reproduction on local service sheets and also for projection via the Singing the Faith electronic words edition or in other projected formats.

This hymn focuses on the heart, mind, and soul in its first three verses, drawing them together in the final verse. As suggested in Hymns to build worship around, this structure offers an opportunity to develop a service around those three elements.

Mr A.O. Scott, great-nephew of Bryn Rees, passed to StF+ the following account of how this hymn came to be written. The account was compiled in 1988 by Bryn’s wife, Morfydd, from memories of a sermon preached by Bryn Rees while he was minister at Woodford Green United Free Church.

The hymn was written while Bryn was minister of the St Clement’s Congregational Church in Ipswich, Suffolk. (Pictured below.) 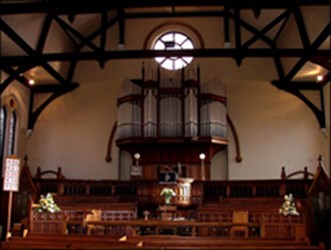 “During 1940-45 Bryn and I lived in a large older-type manse in Ipswich, a city which  was bombed at times but was also on a route taken by the German bombers going to the Midlands and the North, so we had many air-raid alerts as well as bombing.

“Following one of these night alerts, when we had stayed downstairs, Bryn got up when it was over, went into the kitchen nearby, sat down and wrote this hymn. He told me afterwards that the words came quite easily, and that he never altered a word or line or the metre. As he said in his sermon at Woodford Green, he simply felt that the hymn ‘had been given to him by the Holy Spirit’.

“Bryn did not record any specific Biblical inspiration for this hymn, but I think he would approve a reminder of words from Deuteronomy 6, verse 5, recorded in three of the gospels as having been quoted by our Lord:

[Ed. In www.hymnary.org’s extensive listing of Biblical references relating to this hymn, the Deuteronomy verses are not included, nor any of Jesus’ quotations of them.]

‘Have faith…’ was first printed just for the use of St Clement’s Church but was incorporated into Congregational Praise, published in 1951.

Bryn Austin Rees was born in 1911 and ordained in 1935 into the ministry of the Congregational Church in England and Wales. He ministered in Hertfordshire; Ipswich and Felixstowe (both in Suffolk); Muswell Hill, London; and, as a United Reformed Church minister at Woodford Green, Essex, and Epping. He was a chaplain to the Royal Air Force during the war. In collaboration with William Lloyd Webber, organist of Westminster Methodist Central Hall, he wrote several anthems and an Easter cantata, The Saviour. His hymn The kingdom of God is justice and joy is also included in Singing the Faith (255).