In the darkness of the still night

Margaret Rizza observes that “it is very, very important to come into the words before we come to sing them”. As she notes, this can be difficult to achieve in the context of a service – but perhaps not impossible.

Consider reading the words of the hymn (either together or listening to a single reader) as a prayer, followed by a time of quiet, before singing the words as a hymn. One or more verses might also be used as a Call to Worship. 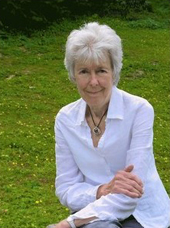 Writing from the heart - Margaret Rizza

Margaret Rizza summarises the idea behind this hymn as “trying to understand the sense of God in absolutely everything and to have trust in that, even in the still night”. God’s presence is not excluded by those aspects of life that make us fearful and vulnerable and which are very real:

In the tears and in the heartache,
in the love through which we serve you,
in the anguish of the dying,
Creator God, you are there. (v.2)

“We’ve only got to read the paper to see the huge darkness people are in”, Margaret says, yet she maintains her belief that “the energy of God is in everything” and that both her task (as writer/composer) and ours (as singers/musicians) is to try to “get away from the duality that separates our bad experiences of the world from God and instead “to express the inexpressible”.

This starting point draws strongly on Margaret’s experience of Celtic spirituality (see David Adam’s Calm me, Lord, as you calmed the storm, StF 624, for which Margaret wrote the music) but the repeated rhythms of the words (“In the darkness… in the dawning… in the mystery…”) have something of the relaxed, focussed breathing often used as part of meditation exercises.

Here, too, are echoes of William Cowper’s attempts to “express the inexpressible”, in particular in God moves in a mysterious way (StF 104), of which Erik Routley’ commented:

... it is better and safer to put our trust in a God “who does not tell you all his plans but promises victory than to some lesser being who has neither the mystery nor the power”.