When? 2nd Sunday in February 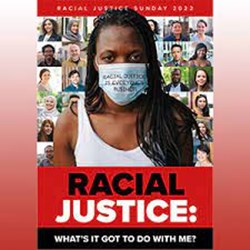 Racial Justice: What's it got to do with me?

A two-part resource for 2022 containing:

More information about Racial Justice Sunday 2022 from the CTBI website

We believe that the universe was created by a loving God who chose to become a human being in Jesus Christ, who has redeemed the world and sent the Holy Spirit to enable us to love one another with God's love. All human beings are equally children of God and loved by God. Since none is outside the love of God, none should be outside our love either.

We believe that the diversity of the human race was no mistake on God's part. God deliberately created variety within the human family and wants us to take as much delight in that variety as God does.

But racism persists in Britain and Ireland. At its most obvious and brutal, it takes the form of physical attacks, which sometimes end in murder. But it takes many other forms as well, like discrimination within the police force, popular prejudice against Travellers or people seeking asylum, or reluctance to accept people of a different ethnic or cultural group as neighbours. Even within churches, people can face discrimination and unkindness because they are different from the majority in a particular community.

As long as this continues, we believe that it is important to make time to give thanks for our diversity and to pray for God's help in overcoming our prejudices and the injustices that reflect and reinforce them.

'All human beings are born free and equal in dignity and rights. They are endowed with reason and conscience and should act towards one another in a spirit of brotherhood. Everyone is entitled to all the rights and freedoms set forth in this Declaration, without distinction of any kind, such as race, colour, sex, language, religion, political or other opinion, national or social origin, property, birth or other status.'