God in all our encounters 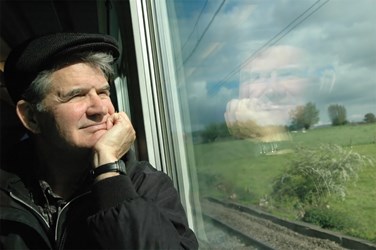 On February 1877, James Smetham took a train to Westminster, during which he observed that “to so many people nothing is ‘worth while’ – not worth while telling, not worth while writing, and yet the incidents of life are pretty similar to all – the same sort of people to see and meet, the same troubles and cares and fears. To most men life seems one dull round, out of which little can be extracted.

And why? Chiefly because they have a low opinion of small things. They don’t see the dignity of the little. A neighbour is nothing. A man must be Sir Garnet Wolseley [the influential army commander and reformer] or [Royal Navy officer and Arctic explorer] Captain Nares or [novelist] Charles Dickens to make them care to see him. Not so did Dickens find Sloppy and Kit and Smike and little Nell.” 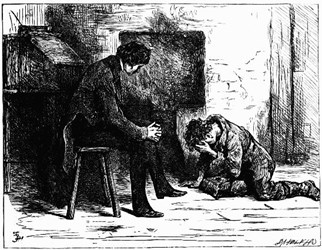 There is something here about the innate worth of all created things and people. Sloppy, Kit, Smike (pictured right, with Nicholas Nickleby)  and little Nell are all younger people who, for different reasons, live on society’s margins. Smetham admires Dickens’ sympathetic response to their lives.

There is also something about finding value in “small things” – and taking the time (as Smetham did) to note the hidden detail, the overlooked object or moment. In Doreen Newport’s early eco-conscious hymn, Think of a world without any flowers (StF 92), she turns this idea round by listing those things we take for granted and would miss if they weren’t there. Pay attention, she seems to say, to all those things for which we can be grateful to God.

Smetham, though, feels more than just gratitude. He looks deep into the ordinary and easily missed and searches for glimpses of what lies beyond – the eternal, the spiritual, the divine. There are echoes in his sensibility of a passage in the novel Middlemarch by Smetham’s contemporary, George Eliot:

"If we had a keen vision and feeling of all ordinary human life, it would be like hearing the grass grow and the squirrel’s heart beat, and we should die of that roar which lies on the other side of silence. As it is, the quickest of us walk about well wadded with stupidity."

Smetham’s particular note about Dickens’s marginalised characters also suggests the causal link between paying attention to the world around us and advocating for justice, fairness and healing cf. e.g. ‘Come, now, you blessed, eat at my table’ – Ruth Duck (StF 695); I will speak out for those who have no voices – Dave Bankhead et al. (StF 702).

Like Smetham, Frances Havergal (another contemporary of Smetham) understands that every detail of our lives and facet of our bodies has the potential to reflect the presence of God.

She draws us from the general to the particular in her hymn Take my life, and let it be (StF 566), which is in part a meditation on Paul’s letter to the Romans 12: 1 (“… present your bodies as a living sacrifice, holy and acceptable to God”). It’s a theme expressed more succinctly in John Bell’s sung response, Take, oh take me as I am; summon out what I shall be (StF 781).