The history of the Methodist Diaconal Order 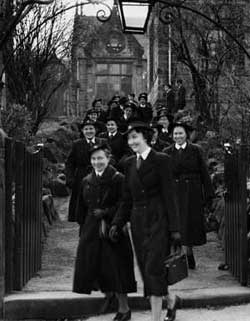 Wesleyan Deaconesses were founded by the Rev Thomas Bowman Stephenson in 1890. In 1873 he had become involved in a new development the Metropolitan Lay Mission - with lay missionaries and deaconesses working with people not reached by other agencies. He realised that women were an untapped resource: they could visit homes where it was impossible for men to go. However, despite this vision, the Church was not sympathetic to this programme so it was dropped, albeit temporarily.

In the 1870s and 1880s Stephenson developed what was to become the National Childrens Home (NCH). Alongside this he founded the Sisters of the Children who worked in the homes and in some way fulfilled his vision of an order of women used by the Church.

The Sisters of the Children was part of a widespread movement as churches began to realise the importance of women in evangelistic work. Bands of deaconesses could be found working in London, Manchester, Halifax and Rugby.

In 1890 Stephenson outlined his vision for a deaconess order within the Wesleyan Church in Concerning Sisterhoods: for any Christian work, except that of the pulpit, the woman is at least the rival of the man A woman, whose hand is softer than a mans for works of character, and whose heart is warmer in sym-pathy with sorrow, is in many circles more powerful for good than he.

There should be vocation but no vow; but he insisted that the sisters should be paid. (This insured that deaconess work was open to all and not only the province of the rich.)
There should be discipline but not servility; he advised against entry before the age of 23, so that the woman might be of serious intent.
There should be association, but it should not exclude freedom.

He described three fields of usefulness

moral and spiritual education (in connect-ion with orphanages and industrial schools)
ministry to the sick, especially the sick poor
evangelistic visitation in connection with circuits, congregations and missions.

The United Methodist Church had an order based on similar lines, founded in 1891 by the Rev T. J. Cope, with its headquarters in Wandsworth, London. In the Primitive Methodist Church the Rev J. Flannigan, founder of St. Georges Hall in the Old Kent Road, began to train Sisters, and later the appointments came under the general care of Home Missions.

The work of Wesleyan Deaconesses developed quickly and in 1894 the first sister was sent to work in South Africa. This began a long tradition of overseas service and the founding of deaconess orders in other countries. 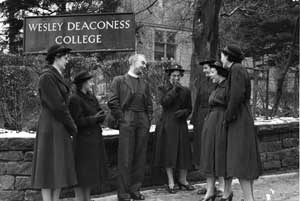 Gradually the Wesley Deaconess Institute moved from an informal movement to a structured organisation. In 1900 Stephenson became Superintendent of the Ilkley Circuit. Whilst there, Conference agreed that what had become the Wesley Deaconess Order be fully acknowledged, and Stephenson appointed its Warden. In 1902 he purchased a house that was to become the Deaconess Institute College, and it opened that September with 17 students.

The workload of a deaconess was heavy. An account of work for one deaconess in 1905 shows a typical day beginning with breakfast for

Post-Methodist union was a difficult time for the Order as they had to cope with the circuit changes following union, the industrial depression and the increasing strain on circuit finances. The Order had to restrict the number of candidates, and some appointments were abandoned because of lack of funds. However with the outbreak of World War II deaconesses soon found themselves serving in many different ways, assisting with evacuees, increased visiting , holding services in hospital etc. 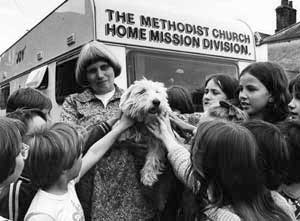 The 1950s saw new challenges with society offering new avenues of work for women, and it was felt that the Order was not offering deaconesses the scope and responsibility enjoyed in other professions. In the 1960s it was agreed that ordination into the Deaconess Order is for life, so ordination can be terminated only by resignation. (Up to that point, women had been obliged to leave the Order upon marriage.)

Opening of presbyteral ministry to women

The event that probably had the most profound effect on the Order was Conferences decision in 1973 to open presbyteral ministry to women. A working group met to consider the Orders future and suggested that a Methodist Order of Deacons be formed, the nucleus being the WDO, but open to men and women. On further discussion it was agreed that:

The Church cease recruitment for the WDO from 1978.
The Orders role be considered with a view to re-defining its role for the future.
The possibility of a new Order of lay service within the Church be considered.

From 1978 there was much discussion and soul-searching as to the future of the Wesley Deaconess Order given that women were able to enter the presbyteral ministry and that people increasingly saw different forms of social work as a way of expressing Christian (and specifically diaconal) ministry, whilst deaconess work was becoming increasingly church-based. Against this people were enquiring about diaconal service, and memorials were coming to Conference urging some action concerning such a ministry.

Everything culminated in the first ordination service since re-opening. This was at the 1990 Conference in Cardiff (deaconesses had previously been ordained at their annual convocation), which coincided with celebrations of 100 years of diaconal service in British Methodism.

Order of ministry and a religious order

In 1993 Conference agreed that the Order was both a religious order and an order of ministry. This meant that deacons could no longer be treated as lay people. Five years later every member of the Order was received into full Connexion at Methodist Conference. (Until this point they had only been presented.) This was the same as presbyteral ministers; the other order of ministry in British Methodism. In the same year Conference also approved the Order's Rule of Life.

In 2004, Conference further clarified what diaconal ministry is all about when it endorsed the report 'What is a Deacon?'

These measures demonstrated the Church's commitment to a distinct and integrated order of ministry that is the Methodist Diaconal Order today.