Smetham had suffered with bouts of depression as a young man, and these were exacerbated in the 1840s by the deaths of his elder brother and father. In the summer of 1877, he undertook a tour of Scotland. He returned stimulated but “weary and somewhat over-excited by his journey”. Insomnia and “dark clouds” followed and led to period of depression that didn’t lift until the end of his life in 1889.

A number of writers have concluded that, over the years, Smetham’s drawing and journaling techniques were at the same time a reflection of his mental state and a healing response to it. What he called “monumentalism” was an extension of the close observation of everything around him (see God in all our encounters). Smetham's biographer, William Davies, describes it this way: 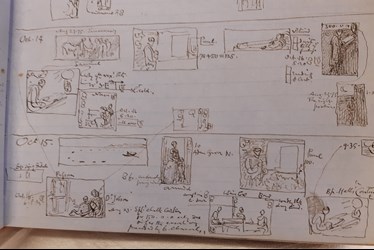 “The system of ‘putting everything outside of you’ as marks or indications of the road-march of life, he called Monumentalism. The manner in which this was usually done was by what he called Squaring, that is, enclosing each design, however slight, within quadrangular lines and putting a date to it.” He stitched together little notebooks (see example left) in which he made notes and drawings about any thought as it occurred – “it might be whilst waiting for a train at a railway station, on the top of an omnibus, walking in the street, or sitting by the fire. . .”

“This system of writing down himself on every occasion (which he called ‘ventilation’) became a part of the daily routine, and had the double advantage of fixing the fleeting moment in a substantial and tangible form, as well as that of affording relief to an oppressed and over-burdened mind.”

One writer suggests that the three “procedures” of monumentalism, squaring and ventilation “blended into a single symptom terminal anxiety”. 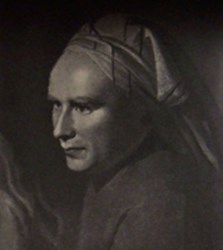 TheThe most obvious hymn-making counterpart to James Smetham is William Cowper (right). Peter Forsaith’s description of Smetham’s monumentalism as an obsessive tendency – “both a coping mechanism but also an artistic expression” – may at times also have applied to Cowper’s writing. In Singing the Faith, God moves in a mysterious way (StF 104) is perhaps the most well-known reflection of Cowper’s strivings to see beyond the clouds and doubt that could overwhelm him. Cf. Cowper’s Heal us, Immanuel! Hear our prayer (StF 650): “deep-wounded souls to you repair, and, Saviour, we are such”.

Though mental wellbeing is a subject that risen up the political, news and social awareness agendas over the past decade (and with still greater focus during the Covid pandemic), arguably it remains a topic we find difficult to open up about in church and worship. If we do speak about mental health, is it only in general and theoretical ways rather than as reflection on mental health in ourselves and in our immediate community? And if this is the case, is it out of embarrassment or not knowing what to say; or out of respect for the privacy of individuals, and recognition that pastoral care and engagement is often best undertaken at a personal, private level?

For those imprisoned in their minds,
obsessed, distrusting or depressed,
with twisting thoughts that can deny
reality and all its joys.
Restoring God, we look to you,
bring healing to all people here.