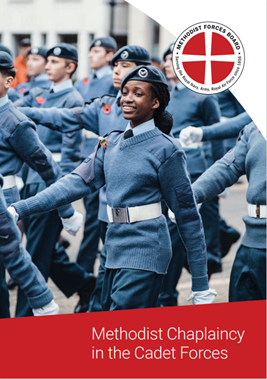 A new resource demonstrating the significant ministry offered by Methodist Cadet Force chaplains is now available by clicking on the image to the right. It contains valuable insight from those involved in this ministry. We hope this resource is useful as you pray for our Cadet Force chaplains.

With over 90,000 young people aged 12 – 18 involved in the Cadet Forces, collectively the three branches of the Cadets represent the largest youth engagement organisation in the UK. Supported by the Ministry of Defence, they use the traditions, values and standards of the armed forces to help young people develop their confidence, leadership and teamwork skills through community and adventurous activities in a focused and disciplined environment. There is no requirement or expectation that young people go on to serve in HM Forces. Each of the three Cadet Forces – Sea, Army and Air Cadets – is run by a separate organisation. The Cadet Forces are run by around 26,000 adult volunteers.

Each Cadet Force has a set criteria for who may be eligible to be considered as a Chaplain. Presbyters can be nominated to the ACF Commandant for their area to become a Chaplain to the Army Cadets; the Sea and Air Cadets will take lay and ordained representatives as Chaplains (lay people will usually be considered only where they are in an authorised role in a church). All prospective Chaplains are subject to a recruitment process, including checks on their suitability to work with young people. As a volunteer, all Chaplains receive certain allowances; they are reimbursed for home to duty travel costs and also have accommodation costs met when on duty with the Cadets.

A Cadet Force Chaplain will offer guidance and leadership to the Cadets and members of staff on moral and spiritual matters. A Chaplain will typically visit their unit/detachment monthly to support and engage with the Cadets and staff, and may be asked to input on topics such as values and standards, or conduct a formal enrolment service when new Cadets are received into full membership of the organisation. Chaplains are invited to attend Annual Camp with the Cadets. A Chaplain may extend an invitation to their unit/detachment to parade at church and share in worship.

Some of the benefits of Cadet Force chaplaincy are:

Anyone who wishes to become a Cadet Force Chaplain must inform the Secretary of the Forces Board by emailing SFB@methodistchurch.org.uk before applying to the relevant chaplaincy body.